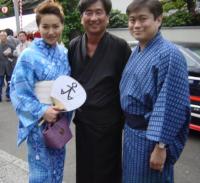 Saegusa-san just turned 60 which is an important birthday in Japan. It is called kanreki. The first birthday party was a suprise party at Blue Note Tokyo after the Enjin01 meeting. The second party was at a small temple in Akasaka and we wore traditional Japanese summer ukata. There were booths with sushi, curry, yakitori and traditional Japanese games. And lots of beer. This picture is Mizuka, Saegusa-san and me at the temple. About 400 people came. It was a very eclectic crowd with ex-prime ministers, artists, company presidents, journalists and actors. I did feel a bit young. When someone asked me where I was going dressed in a ukata, I said, "to my friend's kanreki party", and they looked at me kind of funny. I guess it's not so strange calling people 25 years older than you "friends" in the US, but in Japan it is strange enough to be gramatically incorrect. For some reason, most of my best friends are all much older than me. Interestingly, many of their wives are Mizuka's age. ;-p

Great picture! Thanks for posting that.

Hey Joi - who is Saegusa-san ? Post a link! Maybe you can link to one of your old entries? Joi's growing encyclopaedia of folks. ;-)

Hmm.. I just realized that there wasn't anything on the web to link to for Saegusa-san. Saegusa-san is a classical music composer. He composes and produces operas mainly. He also wrote the music for Gundam, the Japanese anime and I think that made him more money than any opera. He is actually probably better knows as a person with an amazing network that is very multi-disciplinary. He loves people in general and is very generous with introducing people and sharing his network. He reminds me of Timothy Leary in this respect. He also doesn't have the generational prejudice that many Japanese have and seem to be comfortable hanging around with Mizuka and me.

I think his last name is Saegusa, not Saigusa. You can find his name by Google.

Thank you Tai-chan! So I wonder if it is ethical to fix spelling in time stamped postings. ;-)

Not to confuse with Mio Saegusa who is also on Google but seems to be more of a bikini-wearing artist than a musician!

Which reminds me... Google still hasn't listed my new site. I loved Google until I found out it would take over 2 weeks to get it in the index if I don't pay money. Totally unacceptable. (Suddenly upset now that it's personal. ;-p )