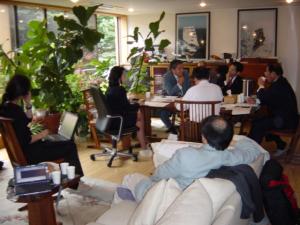 We had another meeting to plan our strategy to stop the implementation of the Japanese national ID program. This program, which as already passed as law will assign 11 digit numbers to everyone and will cause to be distributed by the local governments, IC cards that will become ID cards including the national ID. The network architecture is a mess, the security is weak, there is very little in place limiting the use of the collected information, there is no privacy watchdog organization and the privacy bill that is trying to be passed right now actually deliberately allows for the government to use collected information quite freely.

I have been involved in trying to stop this bill since November last year, but since the law had already been passed (I didn't even know about it!) it's been quite an uphill battle. We are getting close though. There are very few politicians who feel strongly about it so I think we might be able to convince enough politicians to put the program on hold until we can discuss the risks more.

This process has really shown me how broken the law making system is in Japan. Almost everyone we talk to is now against it, but we still can't stop it. It is like a tanker with no one on board.

There is a Japanese web page describing our efforts.