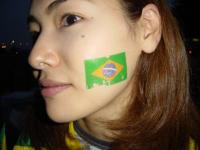 We just got back from the World Cup finals. I had a very difficult time choosing which team to back. I know more Germans than Brazilians, but the Brazilians seemed nicer and more fun. They were also more likely to win. Mizuka definitely wanted to cheer for Brazil so that settled it. 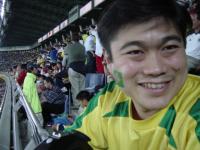 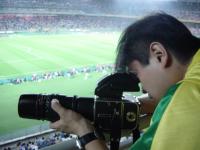 We had front row seats on the second story. My Hasselblad didn't really work from where we were. The lense was too dark and my film was too slow... They were out of the "Sky Box" seats, but I figured that hanging out with the real fans would be fun.

Unfortunately, we ended up sitting with a bunch of rowdy Brits. They seemed to think that I didn't understand English. They gabbed on about all kinds of things that I won't post here, but when Mizuka left to get us some drinks, I told them them what I thought about their behavior. Actually I was quite upset and it was ruining my experience. I said that I thought they were really rude and that I bet that they were fixed income dealers from England. Interestingly enough, one was!

Later, one of the guys behind me was cheering for Germany and the rest of they guys said that they would all punch him when Brazil scored. I told the guy I would punch him too. He laughed. When Brazil scored their first goal, I turned around and punched him quite hard. He was noticably upset, but I guess he didn't have the guts to really start a fight so we shook hands and let it go.

Anyway, they were quieter after that and everyone around us had more fun, I think.

Brazil won as expected and they went running around thanking their fans, which was nice.

We quickly escaped the scene and were able to catch a taxi to get onto the highway before they shut it down to let the emperor drive back. 30 minutes later, Mizuka and I were eating and drinking near our house at Mitate where everyone had just finished watching on TV. We got a warm welcome from the staff and service the best we had experienced. The staff said that they cried when Renaldo scored his goal...

And now it's back to normal for Tokyo and Brazil is on the brink of banruptcy...

Nice report - frontlines of Japan World Cup soccer cultural exchange. You're a participant here, with hooligans and fistfights no less. Too bad those fixed income traders were making bad noise! Were they talking about their hosts, Japan?

I hope that the rush of foreigners visiting Japan (a Japan happy to have won two games) will ultimately make for more good will and cultural exchange.

I think that it would be a good idea to change the system for buying tickets to the finals. It was clear that the British guys behind us didn't like either the Germans or the Brazilians much. There were TONS of Brazilians with signs begging for tickets to get in. Maybe they should have a range of tickets for people who buys tickets for teams...

The British guys went on and on calling everyone wankers. They also seemed to think Japan was just some big sex Disney Land or something... I guess it wouldn't have been as annoying if they kept this to themselves, but they SHOUTED everything and were sitting right behind us, so I heard everything even if I didn't want to. I guess to motto is don't assume you are invisible or that people can't understand what you are saying when you are in a foreign country. I find SO many people who fall into this trap and talk about stuff on the train or at bars that they would never talk about back in the US or the UK...

On my last two trips to Japan, I had one experience each in which I was embarrassed by the conduct of foreigners. In neither case were they primarily American, but that didn't make it okay.

Once was on a bus taking people back from the race at Motegi to the train station at Utsunomiya. I was there with Japanese guests of ours, including Mitarai-san. That morning, we had taken a local Japanese bus and it was as quiet as a church. Going back in the evening, we took a bus run by the race organizers. One of the pit crews got aboard. They were multinational, but the rowdiest were the Australians. They managed to make complete asses of themselves, and seemed to think that prefacing the most obnoxious request with "sumimasen" made it okay.

The other time was on an Airport Limousine bus into the city during the World Cup. We had a load of Dutch fans with us who would, I'm sure, have behaved as badly as the Australians had they had beer with them.

This raises the obvious question: with Dutch and English soccer fans hanging around Japan long after their teams have been eliminated, where exactly do they get the money to do so? It's not a cheap country.

Anyway, I hope that Justin's right and that the World Cup will lead to goodwill and cultural exchange. From what little I saw, I'm worried that while Becks is now Beckham-sama in Japan, the reality of foreign soccer fans will leave a bad taste behind.

I saw an editorial in the Japan Times about how Soccer was very different from Tennis and that the Japanese were about to meet the lower-class British for the first time. The guys sitting behind me were clearly "low class" but they seemed like wealthy stock brokers. I find that many brokers are rude and think that they are "above it all" just because they are rich. Maybe the world has merged two of the worst breeds. The rowdy hooligans and the rich and abnoxious financial services community. ;-)

Of course I'm half-joking. Most brokers I know are nice people, but to answer your question about where they get the money... I think many of the people hanging around being rowdy are rich and rowdy people... maybe the worst kind.

I do think the Japanese feeling is a bit mixed. Japanese have been dealing with rude foreigners ever since the occupation so it's not a new thing. It's probably more shocking for polite foreigners to see other foreigners behaving so badly.

Having said that, I am often very embarrassed by Japanese when I travel overseas as well. We all have our share of obnoxious people I think.

Maybe this diverges from the topic of this thread too much, but I'm curious Joi - do Japanese people act similarly obnoxious overseas, as the British/Aussies/Dutch/Americans/Etc have done recently in Japan? Or have you been embarassed for some other type of behaviour from Japanese folk overseas?

Japanese are not usually very rowdy, but I think they often are not respectful of the cultures they are visiting. I think many people think of "The West" as an extension of Disneyland or something...

No excuses at all for the conduct of those obnoxious Brits at the final. I would just like to say, as a Brit and a football fan for most of my life, I was pleasantly surprised by the conduct of the vast majority of the British fans. I went to 4 of the 5 England games, one Ireland game, and the Brazil-Turkey semi-final. The only poor behaviour I saw was by Japanese-Brazilians in Shizuoka.

Let`s hope the fact that we are discussing rude words and not broken windows and bones is a sign of progress.

Gary, I think I read it in the Japan Times, but is it true that the British Government publicized the fact that the guilty rate in Japanese courts is over 90% and that anyone caught being rowdy would probably be watching the next World Cup over a bowl of rice in a Japanese prison? I think it said that they thought this scared away to more hardcore folks...

You're right though. It was much better than it could have been and I think most Japanese were pleasantly suprised.

Akasaka after Korea won was quite intense though. I was working late and our office is in Akasaka. I heard that the local Korean bars were handing out beers in the street...