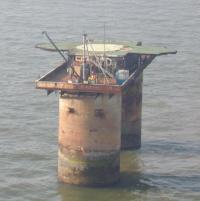 Quoted from Slashdot (I quoted the whole thing since it is short. Thanks for finding this Sen!)


Posted by timothy on Tuesday July 09, @06:36PM
from the private-enterprise dept.
davecl writes: "The off-shore datahaven, HavenCo, is doing well, according to the BBC. HavenCo is based on a WW2 gunnery platform several miles of the English coast. In the 60s it was outside the 3 mile territorial waters, and a retired Army officer moved there and proclaimed it the independent state of Sealand. In the 80s territorial waters were extended to 12 miles. Sealand's nation status is this unclear, but this hasn't stopped HavenCo setting up their data haven. Customers are largely gambling sites, but an increasing number of political groups, such as the Tibetan Government in Exile, are based there in an effort to escape government censorship. More regulation of the web means more customers, and business is booming. Wonder if others will see this as a way of making money out of beating censorship?" We've mentioned Sealand several times before -- it's great to hear they're defying the skeptics.

I was one of the early investors in Havenco and a great fan of the concept. I was also one of the first customers. I have a Sealand flag in my office...

Glad to hear they are doing well.

etoy also have a server on at Havenco.

Since November, 2003, a Dutch research think tank has been working on a series of symbols, coins, stamps and logos for the Principality of Sealand, a mini-state on a man-made island near the British coast. The aim of these propositions, brought together now in an exclusive online pre-release, is to open up a set of associative meanings to Sealand. Meta Haven, as the design project is called, aims to deliver a strategic proposal about community and branding for Sealand later this Spring.

The initial collection of symbols, entitled the 'Jewel Box', consists of found imagery weaved together to achieve a narrative relation to the history and meaning of Sealand as a territorial state, a virtual state and a publicity phenomenon. The different designs go into such notions as islands and utopias, scandals in the network economy, piracy, search engines, fraudulent representations of the Principality of Sealand and their alleged connections, and a mathematical figure resembling Sealand's host platform. The Meta Haven design team, consisting of graphic designers Vinca Kruk, Adriaan Mellegers and Daniel van der Velden, and architecture firm Next Architects, states that their 'Jewel Box' is to achieve a breakthrough in the representation of new country ventures. The Principality of Sealand, existing since 1967 on a former anti-aircraft tower in the North Sea, is the world's most succesful attempt at establishing a new nation. Claiming national sovereignty, Sealand, recently equipped with a national bank, has been attracting global attention since years, most notably by the installment of Internet hosting facility Havenco on the premises of the micro-nation.

As a Dutch design enterprise, Meta Haven relates to Sealand's subject matter from an independent perspective. To combine cutting-edge European design with the representation of a European experimental nation is a much-needed step in the re-engegement of design with the creation and maintenance of symbols, rather than systems.

Meta Haven's 'Jewel Box' is pre-released on the Internet to deliberately interfere with the web-based Sealand phenomenon. The designers emphasize that their propositions are prototypes still, and not an official representation of the Sealand state. The Meta Haven: Sealand Identity Project can be reached by e-mail at office@metahaven.net for comments and information.