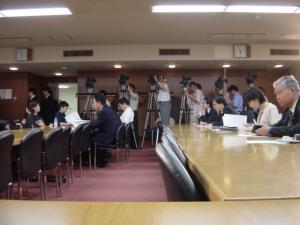 ...and there was no action.

As we approach the August 5 start date for the national ID, Yoshiko Sakura, Ben Shimizu and I (with a lot of help from Gosuke Takama) are leading a drive to sign up as many politicans as possible to pass a bill freezing the start of the national ID program for 3 years until we can have sufficient public debate and technical planning. The architecture is bad, the security sucks, there aren't sufficient guidelines on what the government can use the information for and there is no watchdog organization or even a privacy commissioner. Having said that, even if the security was better and there were a privacy commissioner, I still would be against the national ID. The architecture is wrong and the basic approach to information about people is wrong. There are much better ways to do the same thing without using a single IC card and a single human readable 11 digit number. 83% of Japanese interviewed in a recent survey don't even know that the national ID program exists!

Last week, Yoshiko Sakurai with her amazing pursuasiveness signed up many of the leading LDP politicans including Kamei, Hirasawa and Shiozaki as well as members of all of the major opposition parties. Yesterday was a press conference to announce that we had signed up enough diet members to stop the August 5 launch... not. Over the last few days very strong invisible forces moved to try to squash our movement by putting pressure on the politicans supporting our movement. Koizumi-san, who I strongly support, made a stupid comment yesterday saying that he was for the National ID. (Never attribute to malice, that which can be sufficiently explained by stupidity. I guess in this case, ignorance.) The mayor of Yokoyama, the young Nakata apparently rushed to see Koizumi-san and explain that he should not support the National ID. The dark forces were very quick to label our movement as anti-Koizumi. Sakurai-san is trying to get us a meeting with Koizumi-san to explain the situtation to him and get him to understand. The press conference ended up being us, a bunch of press and the few bold politicians willing to publicly show their support to our movement. (The photo is a picture of the Network TV cameras from my seat. The empty area in the middle was where we were going to seat the politicians. The room is a room in the diet offices building.)

So, we're not back to the drawing board, but have been pushed back once again. With the US pushing for a privacy czar and concerns being raised in the global debate, I'm hoping that the global environment might help... but this may be wishful thinking.

Anyway, if you don't hear from me for awhile, call the Amnesty International and tell that I was last seen protesting the Japanese National ID.

You missed a bit:

"Never attribute to malice, that which can be sufficiently explained by stupidity."

...except in the case of Microsoft.

Takama-san helped me write a blurb blasting the National ID for Tokyo Shimbun (a newspaper). Was just interviewed by New23. 2 minutes of my rant will air Monday... Will be on News 2001 Sunday morning with Yoshiko Sakurai and the Minister of Public Management, Home Affairs, Posts and Telecommunications who is in charge of this whole National ID thing. I'm getting a bit tired of all of this. It definitely can't be helping my relationship with the ministry. Anyway, I'm right so I guess I shouldn't worry. I haven't gotten so much TV airplay in a while. Too bad I'm the fattest I've ever been and I'm tearing apart the only government ministry to ever award me a commendation.

> Too bad I'm the fattest I've ever been and I'm tearing apart the only government ministry to ever award me a commendation.

Cheer up Joi! You have 'till Sunday to spend your days at the gym and to tell yourself you're doing all this for the good cause!

Actually, I just got back from a party and 3 people told me that I looked like I gained weight. One person, Hori-san, the former chairman of Hori-Pro told me that I should be careful because many people think that one's ability to manage one's health (and weight) reflects on one's ability to manage generally... hmmm... Actually, Frank Boosman has an interesting thread on the Atkin's Diet at the following link:
http://www.boosman.com/blog/2002_07_01_blogarchive.html#85249663

Although this has less and less to do with Japan's National ID.

Aside from corporate engagements where I have persuaded people not to do stupid database things, I've only ever had one small success in this arena.

That was in the case of removing the US Social Security Number from the front of drivers' licenses in the Commonwealth of Virginia.

There was a special hearing of legislators in Virginia, and it was almost comical. I gave an impassioned explanation about technical reasons why the number was inappropriate (no check digits, not easily looked up like Soundex, etc.), and a guy from the police said "We don't use the numbers...One guy we arrested was using 50 different ones!"

The sad thing was that Virginia right at this time was deploying new computers at the Dept. of Motor Vehicles, and the costs of making the change (to remove the number) would have been small at that point. The Department went through 9 rounds of hearings tentatively agreeing with us, and reversed position at the last minute.

3 years later, the General Assembly forced them to take the number off of the license anyway, (citing testimony from 3 years earlier) at a cost of more than a million $US, from what I've been told.

They still collect the number and store it, and the American Association of Motor Vehicle Administrators pushes every year for a de facto national ID through "harmonization" of all states' licenses.

You will get tired, and frustrated, but at least at the end of the day, you'll have stayed true to yourself.

Have you been in touch with Marc Rotenberg at EPIC and Simon Davies at Privacy International? They have a great joint website.

Yes Marc is a good friend and I've been in touch with Simon Davies. ;-) Privacy is a small world. Probably a pretty short list for people who want to track us.