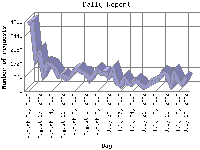 So I've been blogging for 54 days now and I'm definitely addicted. I know I've said this before, but it is DEFINITELY different than just having a web page. As Frank warned me, all day long I think about things to blog. Everything I read on the web is potential blog material and I find I am reading much more and chasing all kinds of ideas a lot further than I used to. Also, since I have a Japanese section, I find I have started to try to read Japanese much more. (Even though I still suck.) I write almost every day. Web surfing has taken on a whole new meaning. I have had 4,652 distinct hosts visit the site since I started. Since many people are behind firewalls that appear as single hosts, the number of people who have visited is probably higher. I check my access log and look at the referral list and graphs of the requests to see what events trigger what sort of accesses and see who is sending my how many people. I find myself spamming my friends, messing around with google and doing all sorts of things to try to increase the traffic to the site. (This obsession with traffic may be a subconscious yearning from helping run Infoseek Japan for so long and always trying to catch up. We are in 3rd place after Yahoo and MSN now... But at least we have outlasted the parent. Anyway...) It is kind of like sitting in front of my computer with a bunch of my friends looking over my shoulder. At the same time, I surf around and read other people's blogs looking over their shoulders.

I talked to Dan Gillmor yesterday on the phone and he said that the audience is now the media. (Or something like that. Correct me if I'm wrong Dan.) I think the Smartmobs stuff that Howard talks about is about a similar phenomenon.

So I'm supposed to be a professional IT investor. I'm also supposed to be spending my time thinking about my work, not farting around on the Net just for fun. Yossi Vardi said that instant messaging was an addictive drug and he (one of the founders of ICQ) was a drug dealer. So where is the money? Is there any money to be made in blogging? There are blogging tools like Movable Type, Radio Userland and Blogger. There are ASP's for bloggers, there is Blogdex a blog crawler/index... but are any of these things really going to make money?

The last few years of the Internet bubble were riddled with people trying to make money on stuff that should have been someone's hobby. Maybe the core of blogging is this way. Maybe I should be thinking about what social changes blogging causes and what new businesses this enables or makes obsolete?

Maybe I should be thinking about what happens when we integrate P2P, voice, video, IM, home servers and cell phones?

Maybe I shouldn't be thinking too much and should keep blogging until it "comes to me." ;-)

I guess somekind of system that makes you feel "if I spend a little more time, I get done something little more" is the key to addiction. hehe.

anyway blogging. I analysed that there are at least two types of bloggers around, professional journalists started own blog and not so pro but wants to express him/herself, and their view toward blog are probably different.

journalist could feel more freedom when they don't need to deal with editors. self-expressors feel more ease to focus on subjects without being dragged by time consuming design effort for the site.

but here's a caution. making a writing logically tamper proof without interaction with third person may be hard. but for fun of writing, you don't need to care this too much. : P

I am definately addicted to reading blogs. I find that I genuinely care about the people who's blogs I read. Is this a bad thing?

Hi Liz. Wow. You're the first person who every said that they "care" about my blog. Thanks! That's great! On the other hand, maybe you were saying it more generally. Anyway, that makes me happy. By the way, did you get here through Kevin Werbach's blog entry about this entry?

Hey Dude,
Long time - no speak.
I think I know how to make money creating some new types of tools which have blogging built in.

And you're right - it does involve integrating all those devices, tasks, markets and opportunities.

Do you know Gen Fukui? He's setting up a Broadband Mechanics office in Roppongi and is working with Dentsu already.

I'd love to chat and bring you up to speed on what we're doing.

Hey Marc! What a totally groovy way to meet old friends. Haha! Yes. Of course you're right about mp3 players, digital cameras and broadband. And yes, I know Gen Fukui. I'll get in touch with him. Can you email me his email address? Mine is jito@neoteny.com.

Let's chat. BTW, have you tried opencola? I don't yet know if this solves any important problems, but it sure looks interesting. Maybe we can chat there. My id is "joi".

How to make money?

Haven't you realized that in our day and age, all information, all digital content, is an advertisement? In this blog, you're advertising yourself... ;)

The way to make money is to become famous, and the way to become famous is to advertise. The more people know you, the more will be willing to buy a t-shirt that says 'Joi Ito', just because they think you're the $#!+... ;) They'll be willing to donate money, just to let you blog... One of my good friends runs a MUD that he wrote entirely himself, called Nodeka. He makes a significant amount of money just from the donations of mudders who love his MUD...

Hi Joi~ I got here through Justin Hall's site. I am a faithful reader of you both Justin & Jane, now you. I have started to research topics based on what you guys write about. Its really interesting & fun. I enjoy the personal notes and I find that really makes the blogs entertaining. And yes, I do have a life. *smiles*

Here is an interesting link from the Washington Times about BLOGs. Suportive and derisive at the same time. (hey, when do you add spell checking?)

"the idea that the blogosphere will overpower the establishment media is batty. Imagine a bunch of students in large classroom. If one student rises up and shouts his disagreement with the professor, that's lively and interesting. But if 50 students do the same thing, it's just noise"

Trevor, the only problem is, my job is to make money for my company and we probably can't make enough money to make my shareholders happy selling T-Shirts. ;-) I generally agree with you. I always tell artists who worry about copyright that they should worry more about staying famous than about collecting on past work...

Liz, cool. Justin is the muse/technician/friend who got me out of the "men use html" mode to "blogs are great" mode and I owe him a lot for it. He is one of the most uniquely positive, edgy, quick and great guys that I know. Designed for the Net. ;-0 I've been reading Jane's blog/site and I am a great fan of hers too. I read her site a lot when I was thinking about my site.

Barak, I read the article. Interesting, but I think he's wrong. I think blogs have a good chance of romping over mass media. ;-)

Weblogs are much more immediate than one-way broadcasting..What happens when they *combine* with mass media?

I just read this in the New York Times.. hmmm..kind of a first, maybe..

Free Weblog Service and a Vampire, Too
By DAVID F. GALLAGHER

What many people like best about the personal journal sites known as Weblogs are the unmediated one-on-one connections they allow. After all, what better way to get first-hand updates on the day-to-day life of a Brazilian soap opera vampire?

In what Simone Barreto, a Globo.com spokeswoman, described as "the interaction of television with Internet," several fictional characters from "O Beijo do Vampiro" ("Kiss of the Vampire"), a new soap opera beginning on the Globo television network tonight, are using the service to start their own Weblogs, often called simply blogs.

One character, a vampire named Boris, is already blogging (
http://boris.blogger.com.br).

The network's soap operas, or telenovelas, are watched by millions in Brazil and are often exported to other countries.

Evan Williams, the chief executive and a co-founder of Pyra, said in an interview last week that Globo had approached Pyra about a partnership earlier this year.

The decision to team up with a Brazilian company was an easy one, he said, because Brazil was "by far the second-largest Blogger-using country," after the United States.

Mr. Williams estimated that up to 13 percent of the more than 750,000 Blogger users were in Brazil.

He would not disclose the terms of the deal with Globo.com, which is licensing the Blogger software and trademarks.

Ms. Barreto said the soap opera characters would be using their Weblogs to write about their adventures over the course of the show's run. (She said the Weblogs would actually be written by Antonio Calmon, the writer of the show.)

Boris, played by Tarcisio Meira, is an 800-year-old vampire who wears armor and a horned helmet. In modern-day Brazil, Boris finds the reincarnations of his lover and his son, and, presumably, the latest Internet trends.

Listed below are links to blogs that reference this entry: Addicted to Blogging.

TrackBack URL for this entry: https://joi.ito.com/mt/mt-tb.cgi/145

I've been thinking a lot about blogging recently, since I started this project a couple of months ago. A story Read More