Litter on our doorstep » 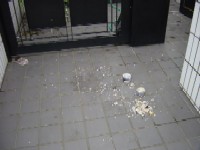 This morning was nice an cool after a rainy night. Mizuka and I went to get the morning paper and there was this homeless guy rustling around at the entrance to our home. It appeared like he was changing or something so we decided not to bother him and let him get dressed or whatever in peace. After quite awhile of what sounded like complete overhaul of his wearable computing gear, we heard him leave. When we got to the entrance where the paper is, we noticed a big mess. I wonder if the mess he left (some old rice, cat food and wrappers) was just laziness, a political statement of some sort, something he thought was funny, a work of art, a gift for us, or none of the above. In any event, we found it very annoying. I guess if he thought it was a gift, it would be kind of like what the Americans do to some countries. ;-p Anyway, the next time he comes back, maybe we should engage in some foreign policy and tell him that we in fact don't need any food, but that we are happy with him using our territory to organize his next movement as long as he leaves nothing behind.

That was a very politically correct method of stating your discomfort with you visitor. However, this disturbs me. I have never heard of this happening. When my friends do have visitors such as yours, they are usually very curtious and respectfull and do not leave anything behind. It wouldn't surprise me if the person returned in the future. If were me...I would deploy some sort of camera capable of recording his actions as to protect yourself and forecast any future danger that you or Mizuka may be in. then again I have been living in the USA for too long and might be a little paranoid...;-)

Well Joi, lets face it. If this person had to change at your front door, its safe to assume his life isn't, shall we say, manageable. It was probably the best thing for now, not to confront such a person, but if it were to continue, I myself would have to shue the person away. (Mark, the camera stuff was a bit much. lol) BTW, when I visit other countries, as an American, I have never left a mess at someones front door. Their kitchen? Thats a different story. 8-)

NAGOYA -- A 73-year-old pensioner was arrested Thursday for attacking two children with a pair of scissors because they told him not to dump rubbish, police said.

The man, Haruo Fujimichi, of Kasugai, Aichi Prefecture, has been charged with assault.

Police said Fujimichi discarded a cardboard box in the bicycle parking lot of a Kasugai apartment block on the night of July 1.

A 12-year-old boy spotted the pensioner and reportedly said, "Excuse me! You can't leave rubbish here!"

Enraged, the 73-year-old grabbed the elementary school boy and started bashing him. The boy's 15-year-old brother rushed to his rescue but Fujimichi produced a pair of scissors he was carrying and thrust them at the boys.

I see that here in the states. Elderly people who seem extremely angry over the tinest thing. Is it a lifetime of anger that has boiled over? Or is it a case where they need some type of mediation they aren't getting? Some people are so explosive and out of control.It doesn't pay to confront them in a lot of cases.