Being fasionable in Japanese business society »

The picture is from the shoene (Cool Suit) Page. 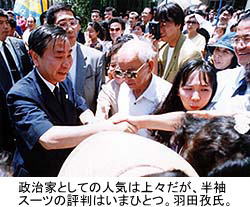 Yesterday was probably one of the hottest most uncomfortable days I've ever had from a fashion perspective. We were all wearing suits and ties from 9am to 8pm sitting in the same room of a Japanese government building with the themostat set at the official 28 degrees (which is 82 degrees fahrenheit) for government buildings. This energy saving policy is a good thing from a tax paper perspective, but pretty tough for someone like me who isn't used to it. This policy prompted a whole line of energy saving suits. Former Prime Minister Hata is show here on the "cool suit" page with his short sleeve shoene suit which I hear he still wears.

Also, the New York Times reports: The Nation: Pressed for Success; When the Going Gets Tough, the Tough Put On Suits

At the meeting yesterday, I complained about the heat as well as the fact that we all were wearing neckties. One of the older men said, "I can't focus without my necktie on." Another guy said, "it doesn't feel like you're working when you don't have a tie on."

Well. TOUGH. I'm wearing shorts and a short sleeve shirt today. I'm not tucking my shirt in either. So for those of you people who are offended by my fashion today, too bad!

Full agreement with this!

Neckties and business shirts may be "suitable" for a more temperate clime, but Tokyo's summers lends themselves to more casual and cool wear.

Have a great weekend!

Consider what it says about a person's ability to "think outside the box" that he cannot focus outside the necktie...

T.S. Eliot would sympathise, no doubt. Eliot conducted himself in an extremely formal manner. "Tom," Virginia Woolf wrote in her diary, "will be here in a four-piece suit."

Well, I'm all for increased comfort, but I gotta say that shoene suit looks mighty daft.

In Hawaii, where I grew up, one's "power suit", if you will, was an expensive ($30) aloha shirt (not the tourist kind, but the muted "inside out" kind). If someone showed up in a suit and tie, it was a sure sign of "mainlander" (read: outsider) and any "power" or "focus" seemingly derived was in effect significantly diminished.

I used to say that neckties were the perfect accessory for an executive. It cuts off the blood supply to the head, where it really isn't needed anyway. Then I became an executive and yes, it is quite true...

I walked into a Branch of Credit Lyonnais today here in Nice (where I am on vacation), and the teller was wearing a dirty t-shirt and shorts. It WAS air-conditioned inside...

I think the french really take "casual friday" to the limit... Wouldn't it be funny to see a teller at Sumitomo Bank working in a t-shirt? Maybe once the banks go bust.....

I wonder, what is a four piece suit?

Funny, I just went suit shopping yesterday, thinking I needed something more formal to fit in with Japanese business culture. I didn't get anything but trying on rows and rows of black wool made me a little depressed. I think we should bring on the seersucker!

But I suppose it will be fall soon...

It's called a teleconferencing Intranet.

That "cool suit" is anything but "cool". It would be impossible for me to take anyone who wore such a thing seriously!!

I certainly can sympathize with the discomfort of having to wear a suit and tie in hot weather. It is no fun wearing a lawyer's costume here in Yuma where we have had over 100 consecutive days of 100 plus degrees. As a result, the rules of court are somewhat relaxed. No jacket is required (except during trials), but a tie is still a necessity. Personally I would prefer the Hawaiian way, but there is something to be said for the artificial feeling of responsibility one gets when formally attired.

Where is Yuma? Is that in Tibet?

So I guess I can conclude that the type of people who read my blog generally don't like suits and think "out of the box." ;-)

I heard once that the buttons on your sleeves were there to make it difficult for you to wipe your nose with your sleeve. I wonder where the necktie originated. I wonder if it was to wipe your mouth or to keep your drool off of your shirt or something...

A quick and ready noose.

Covering the seam of a shirt.

A leash! for a lover.

Suits always attract my attention. I love to see a man in a nice suit. Its so masculine and handsome. Warm in hot weather, but distinguished non the less.