Had lunch with Megan Smith, Kara Swisher and Louie » 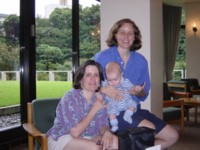 I had lunch with Megan, Kara and their 3 month old son Louie yesterday. Kara was invited to Japan by the Japan Society on the U.S.-Japan Foundation Media Fellows Program. Steven Levy, one of my favorite journalists was also recently here on this program. This is a great program since I get the benefit of all of these great journalists hanging around Tokyo in rotation, especially since even the New York Times thinks people are losing interesting in Japan. (As Tokyo Loses Luster, Foreign Media Move On Thanks for the link Justin.) (Can't find the article right now...)

I think I may have met Kara before, but we never really had a chance to talk. Kara reports on Silicon Valley for The Wall Street Journal. I've known Megan since she worked at Apple a LONG TIME AGO. I THINK we met through Jeffrey Shapard or someone else when we were trying to get a demo together for SOMETHING in Japan. (As I have written before, my memory sucks...) Anyway, Megan is one of the most intelligent, happy and nice people I know... in fact that most people know. But you all know that. She knows EVERYONE.

Megan was designated as a Technology Pioneer in 2002 by the World Economic Forum so I see her at the World Economic Forum events regularly. Megan helped us when we were trying to get Magic Box Productions going. She's also been great in introducing me to interesting folks. After Apple, she went to General Magic where I think she was the chief engineer or something. After that, she went and started PlanetOut which has become the largest gay/lesbian site in the world. Megan is now Vice-Chairman of PlanetOut.

So we hung out and talked and it was great fun. I always talk too fast and too much when I get excited. We all kept interrupting each other, but for some reason it worked out OK and I think we got a lot of talking done. Kara, Megan and I talked a lot about where we thought things were going. We talked about my blog, Japanese companies, OTHER PEOPLE ;-), and technology. Kara was great because she knew so much about everything and pushed me to be more concrete about what I was saying. She also didn't hesitate to roll her eyes when I said something that didn't make sense. I had been wondering who could deserve to be Megan Smith's partner, but Kara definitely passes. Louie was really cute and didn't cry once. He gave me his meishi and it had his email address on it. He laughed at me a lot. I couldn't tell whether he liked me or thought I looked stupid.

I'm really glad they're in town and I'm sorry I'm going to miss most of their trip since I'm leaving for Europe with Mizuka on September 11. (And no, I didn't get a discount airfare.) Mizuka and I will be joining them tomorrow to go see the Tokyo Lesbian and Gay Parade 2002. (entry in PlanetOut | their web page) Hopefully, I'll have some pictures later from there.

ah! that Megan. now I remember. I think that you introduced me her in 92 in SF at front door to a rave party. since then I bumped into her several times in SF like Wired Party or such.
glad to hear they are doing well.