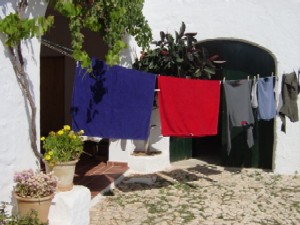 The weather is very interesting here. It is SO hot in the sun today, but SO cool in the shade. There is a nice breeze, it is dry and the sky is blue.

There is also a lot of TIME today. (On the old English language MacOS, when you rolled over the QuickTime icon in the control panels folder, the balloon help would say something like, "Time: a dimension which moves constantly from the past to the future." or something like that.) When you have a lot of time and a lot of sun, it is amazing how interesting and fun it is to do laundry and dry it in the sun.

I wonder if it is the combination of the heat and the time, but the caterpillars move REALLY fast here. Caterpillars are the only thing in the world I am really afraid of. The white cat (the one sitting in the shade in the picture) is playing with a big fat caterpillar and has lots of green caterpillar puss on its face and is now walking towards me. Ack!
Menorcan physics and Menorcan psychology. I am confronted with a combination of some of the most pleasant sensations as well as confronted with some of my most horrid childhood (caterpillars) and adulthood (connectivity deprivation) fears.
(The cat is licking the puss off of its paws and face.)

Earlier, I was talking on my "handy phone" (They call cell phones "handy phones" in Europe. They used to call them that in Japan, but recently they refer to them by their Japanese name keitai denwa.) on the roof of one of the buildings staring over the rolling hills under the blazing sun talking to Jun who is in Tokyo. We were talking about an investment opportunity. We were doing business. I wonder if there is a way to spend more time sitting on roofs under the sun in the breeze instead of sitting in muggy offices with neckties on.

I am wondering about a lot of things sitting here in Menorca. I wonder if it is like a dream and I will forget it all or it will be irrelevant when I return to Japan. I wonder if blogging it will help me remember like the people with Alzheimer's who blog.

Mizuka just swatted a pair of mating flies and they are now sitting on the floor nearly-dead, locked in a deadly love position. The ants quickly surround the half-dead lovers and begin to drag them away...

I remember feeling like time moved at a different rate when visiting Saipan last year. I wonder if any studies have unconvered anything interesting regarding this change in the subjective perception of time...

On a related note, I definitely feel a lot less rushed these days and more engergetic because of the 20-minute breaks I've been taking every 1.5 - 2 hours or so. I'm thinking of trying the Uberman Sleep Schedule (or something similar) I saw a pointer to on Trevor Hill's site -- I think I'll need to take a vacation or quit first to try it though (-;

I'm planning on trying it within the next year sometime, but I've got too much going on right now to make a major transition like that... I will definitely write about it when I do it though... :)