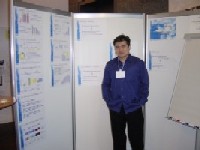 Oki Matsumoto and I, with the help of Ichikawa-san of Keio University prepared a bunch of slides about what was wrong with Japan. Since I was bouncing around Europe having fun, I made Oki bring the printed slides to Geneva. Thanks Oki! We stuck the slides up on panels to make a booth for the Expo Bazaar during the GLT summit. We made 5-10 minute presentations to GLT's as the passed through the both and got feedback from them. I will post the presentation slides later, but the jist of our presentation was...

Japan was in trouble and needed reform, but because of the cost to the global economy of executing these reforms, it was very difficult. Also, the problems in Japan are rather well hidden and complex we tried to explain these issues. We focused on three points. Democracy, Diversity and Markets. Japan does not have any of these working well.

Diversity was necessary for markets and democracy and diversity included changing the educational system to allow a variety of respectable career paths including risk taking paths. The media needed to be more open and free to allow diversity of opinion.

Democracy required a more fair election system. It required a judiciary to help check the legislature.

Markets were important to reallocate resources. We needed a strong organization like the SEC to enforce rules in the markets. We needed corporate governance to create financial transparency.

We needed a lot of things. Yu Serizawa took notes of the session and I typed them up in random order. We will organized these notes and output them more formally after discussion with the rest of the Blueprint for Japan 2020 team in Tokyo, but for your reference, I will post the notes here as is.

Here is the powerpoint presentation of the slides for our booth.
Continue reading GLT Summit Expo Bazaar Booth - Blueprint for Tomorrow's Japan.

Do we use the word revolution?

Minimize the risk of the revolution by having a blueprint

Q - Expectation for changes were high when Koizumi was elected, but did cause reform?

A - He set the mood and the atmosphere but he did not implement is not here to cause revolution.

A - Act now for the future.

A - Tipping point. It doesn't look like it's changing, but maybe we are closing on the tipping. What are the points of the disequilibrium that is pushing us to the tipping point?

Once we empower people, we may be surprised by the support from the public.

Q - How do we engage the young people who are in the end the stakeholders of the future? They will be the people leading and paying for the pension. Are they aware of the potential problems we are creating for them?

A - Media reform and education

Q - Are the Japanese happy? We are rich and we work hard, but are we happy?

A - Our major problem is elders is they say, "you are demanding too much. Look at how far we have come since 1945." We would like to compare ourselves to the rest of the world, not our past.

A - We think we are rich, but we aren't. We are funding the $8t balance sheet debt.

Government is borrowing money from younger generation. They are insolvent.

Cause enforcement through SEC and Judiciary

A - Plaza Accord was US policy to force Japan to switch gears from high intensity growth and cause the bubble and the collapse (We've been driving on first gear for too long and Americans decided to wake us up in brutal way) Inability of commercial bankers and the process of using land as primary asset for loans and very little direct investment.

A - Around '85 shifting from land to building value. (For instance earthquake proof buildings)

Q - Can the global economy afford our reform?

All or nothing "shoganai" approach - introducing values that more commonly accepted

Q - Is the Japanese B/S really worse than the US?

Japan is an obedient society and system build to be controlled first by the Emperor and then the occupation so now no one is driving?

We should have known? Maybe US should have done something better than the Plaza According?

Comment from us - Japan isn't hooked in with the out side world.

The Japanese are not integrating with the external world from the perspective of free trade and media. Maybe Japanese language foreign media. Try to increase the engagement of Japan.

Fundamental problem that the structure does not allow change. Can we bypass by empowering individuals? (See Nagano-ken) Use ID to do polls?

Japan is a fake democracy with socialist culture. A true democracy would allow diversity of opinions, not the collusion between government and media. Government is not making policy but just allocating resources.

Yu - Collusion between all sort of other groups.

Q - What if there are no longer any resources to be allocated? What does the government do then?

Making a new post-industrial Japan. We need to dump manufacturing and shift to services, IT and Bio. How do we fix low productivity sectors?

We need the "foam" like the backward high jump. What enables this change?

A - Japanese are partial to foreigners and keep the engagement partial

Need to open up to the world

Q - Need to be more confident in the world

A - How do you produce more confident people

Are we happy or are we unhappy - figures and reports. 50% of people are unhappy with their jobs. Why can't we express the unhappiness

Double income had to be applied to agriculture so we allow subsidies which are anomalies. Japanese story is all about anomalies.

Can the world afford real change in Japan.

It is so complicated and so intricate. Where is the tipping point?

Japan Inc. doesn't work except for industries that aren't regulated.

Some things are changing. More entrepreneurs…

It's not true that people are not interested in Japan. For instance, pop culture…

No longer an economic argument

Stunned by the ignorance by outsiders on Japan

System locked into equilibrium. Can't get out of it... Diversity is push it.

Is it a leadership issue?

What are the gains of changing, not-changing. Acknowledgement of the present problems. Reckoning.