Rebuilding Modern Politics: Can the System Fix Itself? » 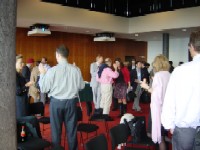 As the rapporteur of this session, I was supposed to take notes on a brainstorming session facilitated by Ted Halstead, President and CEO of the New American Foundation, a think tank, and Philippa K. Malmgren, Special Assistant to the President for Economic Policy, National Economic Council, USA. There were about 11 other participants. The description of the topic was:


Public interest continues to wane in almost every industrialized democratic country. What needs to change in terms of political priorities, accountability, ideology, organization and leadership in most democracies? Will the next generation of leaders be able to reverse the trend from within existing political frameworks?

The discussion went all over the place with a variety of plans like creating an international organization to consult to new democracies and a variety of ways to wake up the voters and chase away the bad politicians. With the help of everyone, I tried to boil the discussion down into some concrete issues and things that we might be able to do to address these issues.

Here is a draft version of my report that I submitted to the World Economic Forum. I think and edited version of this will end up in the briefing package for the participants of the forum next year.

There are issues common to most democracies and some practical initiatives to address these issues.

Control of agenda by extremists

In most democracies, for a variety of reasons, extremists have control of political agendas.

In the United States, the two party system and the ability of extremists in the parties, the religious right in the Republican Party and the minorities in the Democratic Party are able to exercise power through the ability to mobilize people while the moderates are not active and don't vote.

The referendum process in California that was initiated in part to try to bypass the extremist in the legislature has ended up being used primarily by the extremists.

In them Middle East, the extremists have taken charge of the agenda on both the Israeli and the Palestinian sides.

Lack of choice of politicians

The two party system and the electoral system in the United States does not give people a choice of alternative politicians.

Lack of participation and apathy by young adults and moderates

Young adults and moderates do not vote in most countries.

In the US, polls show that most young people are independent, neither Democrat or Republican.

Lack of ideology in politics

Most politicians lack ideology and are focused on special interests and the interest of powerful extremists. There are few politicians willing to risk their political careers for strong policy or ideological views.

We must improve the quality and the behavior of politicians.

We must encourage more non-professional politicians to become politicians or join public services.

There are several specific policies that would help.

Currently, the cost of campaigning and the low financial incentives for politicians and public servants hinder people without the sufficient financial resources from become involved in politics. In addition, the funding requirements cause politicians to rely on funding from special interest groups.

The election systems in many countries make it difficult for independent or new politicians to be elected. The "winner takes all" electoral college in the US forces a choice between the two parties and independents cause votes to be distributed between similar candidates diminishing their ability to win.

In other countries such as Japan, the numbers of seats in the proportional system is not balanced and cause certain regions to be unfairly represented.

The "Instant run-off" system which has been enacted in California allow voters to vote for several candidate in order of priority so that votes from candidates which can not win can be diverted to the second choice candidates improving their chances of winning creating a more fair outcome.

Several countries have implemented successful mandatory voting. Mandatory voting will cause the moderate and the young to vote diminishing the ability of the extremists to control the election process.

In many cases, it is impossible for politicians to resist the extremist forces and it is necessary to bypass the legislature and empower the people to organize and affect policy directly.

Technologies and methods to empower people

New technologies provide access to information and ability for the people to be empowered to learn and organize themselves into forces to back policies.

The media is an essential element in inclusion of the public in the political process and in empowering the public to take action. Liberating the media in a nation is essential, but the practical methods for such liberation is unique in each country.

its good but
u did't explain that

"how ideology powerfull for a country?"
thanx
take bye
if u have answer of this question plz mail me.
thanx