Plugs and a View » 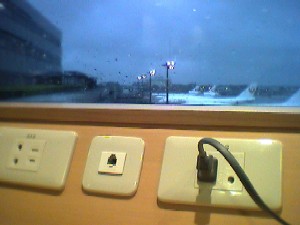 So it's boarding time, but they told me to sit tight in the lounge. At least there are plugs and a view and diet coke. Some of the guests were complaining that the view and plugs are in only the smoking room... Oops. BUSTED... ;-)

"ANA regrets to announce that flight 955 will be slightly delayed for preparation. The new departure time will be announced as soon as it is available."

I can hear someone's voice over someone's radio giving much more detailed information about what is going on. I wonder if they sell radios in Akihabara to listen to the control tower. That would be extremely useful about now. I see some planes arriving though so I guess the landing/takeoff freeze is off. But the sky continues to get uglier.

I see a plane taking off at a very steep angle. Probably in a hurry to get through the clouds... I remember Martin boasting about how quickly his Lear jet could climb and how he could avoid turbulence...

Hmm... I see an Air China plane pulling up to a gate. I wonder if that's the plane I was supposed to get on. I think refueling takes almost an hour so I think we should still be able to take off before them... I hope.

Yes! My flight is boarding. See ya!

So I made it. We sat on the runway for hours I think. The plane was shaking vigorously in the strong winds as we waited for the runway to open. The planes that were supposed to land kept failing and going around and around trying to land. Finally, we took off and made it in to HK at 9:40pm or so. Instead of 00:00, the Typhoon hit Tokyo around 9:00pm so we barely made it out. Mari Matsunaga, a panelist on the JAL flight after ours didn't make it out. Idei-san asked me to talk Yanai-san into taking her place on the panel. ;-)

Times like that, sitting on a violently shaking plane on a runway, hoping to fly up into a shitstorm, I wonder, wait, why am I so desparate to make this trip? If it's so short, and I die, isn't that silly?

But then I remember some pretty compelling statistics, that most planes don't crash, and life at home can be dangerous and stupid too. Just sometimes, i remember that it seems giant metal birds aren't supposed to fly.

Ooops. That should be Beijing, not HK...

Yes. Similar thoughts went through my head too Justin. Having said that, the set up of this trip must have cost me and my team several dozen hours so that would have been wasted. Also, I was dreading being stranded in the airport overnight with a bunch of hot, sweaty, tired people...

Well the option I took to avoid this mess was to change my flight to the AM and have drinks with Justin (well actually Justin had fruit juice, but that is technically a drink). I too fear sleeping in Narita on some bench more than crashing and even more than catching a 7AM bus to the Airport. Given a 6:30PM flight to Shanghai, it looks like I made the right call.

Ofcourse not only did I get to avoid the drama, but I had the pleasure of meeting Justin and learning a number of interesting things!

Joi, I would not have liked to be in your palce and had no coice but to try, your a far, far better man than I.

Are you in Shanghai now Barak? I don't know if I am a good man, but I was flying just to participate in one thing so going the next day just didn't work for me. Mizuka was already there as well so in addition to abandoning my work, I would have been abandoning my girlfreind. ;-p

Anyway, I'm in the car on the way home from Narita all in one piece... Misplaced my Foma card somewhere so I'm using my Air Edge prin 64K card/account which is a BIT slower...