IBM eliminates patent on who uses the toilet next » 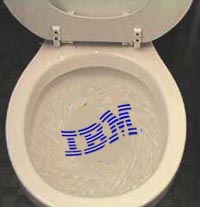 IBM has quietly eliminated a patent it received on a method for determining who gets to use the bathroom next.

The computing giant received a patent for a "system and method for providing reservations for restroom use" in December. But the company later decided to renounce all of its patent claims after a petition was made against it, according to documents released this week by the U.S. Patent & Trademark Office.Recently, I had been telling people that even though the market has collapsed, the number of patents being filed continues to increase. This, I had been saying, was an indicator that people were now focusing on building technology instead of their stock options and that we should look forward to great technologies ahead.

This article makes me wonder... ;-p

I think you're right. All my life I've watched my Dad work as a patent attorney, and it has _always_ been the case that when there were recessions, he received much more work.

The tough thing I think for the slashdot types (radical anti-capitalist linux geeks) is the lesson of the tares and the wheat. You just can't devise a patent system that would weed out every single frivolous patent at the start. You need to do your best, but then let any of the ideas with potential grow, like tares and wheat growing together, until in the end, you separate them.