Broadband Media Distribution/Can't We All Get Along? » 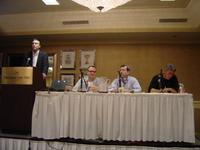 Cory is talking about the broadcast flag issue that he has been quite active in resisting. He blogged about it on Boing Boing, but it is basically a flag that can be set in broadcast video to prevent redistribution of it on the Net. The idea is to get commodity hardware and software companies to implement this. The broadcast flag is part I in a three part plan. Part II is to force all analog to digital converters to have technology to sense for watermarks and disable the conversion of anything that had a copywritten watermarks. Part III is to redesign the Internet so that every packet is examined for infringement and discard them.

Sean thinks that the media industry has been bashed so much recently that things are much better than the past. He thinks that there is a viable model that allows people to rip and discover music...

Morgan says that Tivo will be profitable next year... Customers are "happy as clams..." Morgan is talking to the advertising industry about how to use the "real estate" in the living room where families in the US spend 7 hours a day. Wrestling with lots of issues such as copying content between Tivo's. The idea of attacking this without support of the industry didn't make sense to Tivo.

You can't have fair use with the current laws...

I think we need to take a no-compromise stance, at least in the EFF sense. I'm sure Tivo and others have a difficult time because they are obviously exposed to the lawyers and suits from the media industry, so they have to compromise. I think the consumer has to be the activist to push for our rights in the copyright field. I doubt that Tivo or any other company can take this position.

I think that Brewster's NPO model is also great because it's not a really easy lawsuit target...

Joi's Moblog was introduced by Mr. Dan Gillmor to SuperNova conference audience at his morning speech.