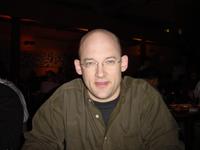 Dan Gillmor introduced me to Clay Shirky tonight and Dan, Noriko, Barak and I had dinner with him at LuLu's. We got in without a reservation. What a change from the old days! Clay is very cool. According to his web page:

He was supposed to talk this morning at Supernova, but didn't make it so I asked him what he was going to talk about. He said he thought that politics of the semantics was a very political issue and more relevant than the technical discussion. He also talked about the economic significance of the difficulty of switching protocols vs. api's and how important and political protocols were. He had very broad interests like me (unfocused?) and we talked about lots of cools stuff. He knows Marko who I wrote about earlier. Thanks for the intro Dan!