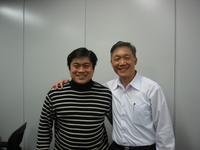 a bio from the ASE web page that I edited a bit
Leonard Liu, Ph.D.

Leonard Y. Liu was President of ASE Inc. since November 1999 and announced his retirement December 6. He was also the Chief Executive Officer of ASE Test and Universal Scientific Industrial Co. Prior to joining ASE, he was Chairman and Chief Executive Officer of Walker Interactive System Inc. Dr Liu has held other top management positions at leading technology companies, including Chief Operating Officer of Cadence Design Systems, President of Acer Group worldwide and General Manager of IBM's application enabling software business unit.
Leonard visited today and we spent the day brainstorming. Leonard is on my advisory board and is one of my most helpful business advisors. I met him through his daughter Peggy Liu. Digital Garage invested in his daughter's company and he invested in Digital Garage and later Neoteny.

Leonard was the chief hardware and software architect at IBM at one point and architected SNA and SQL. He moved from research to management and left IBM to become a well-respected serial turn-around/take-to-the-next-level CEO. Leonard is tremendously energetic and is extremely execution oriented and visionary at the same time. I'm always impressed with Leonard's focus and his willingness to spend time to coach me when I have something specific to talk about. I always felt very guilty taking big chunks of Leonard's time when he had a $3bn company to run, but now that he is "retiring" I hope I will get to see him more often and feel less guilty. ;-)