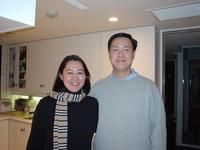 Karuna and her husband Horace visited my sister for dinner at our house and I got to say hi and chat a bit. Mimi and Justin did an interview of Karuna on Chanpon. Horace works for the US government and Karuna is now taking care of their new baby, Justin. Before that Karuna was an anchor for CNN on their prime-time news show and before that for other news agencies such as NHK. I remember when she was broadcasting Japanese news in English for NHK, all of the Japanese students in the US who watched her show became HUGE fans of hers. She's quite an amazing person. I first met Karuna at the American School in Japan when for some reason, my trig teacher decided that my algebra sucked and made me take an algebra class with the class below me. The only good thing was that I got to sit next to Karuna. Anyway, all of Karuna's fans can rest assured. Horace is a great guy and worthy of his new position as Karuna's husband. ;-)

Horace, can you do something about the treatment of Arabs immigrants in the US?