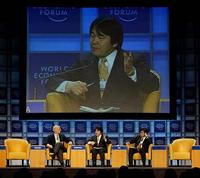 Michael Porter was the moderator and I was the challenger for a 30 minute session with our Minister of Financial Services and Economy, Heizo Takenaka. I was allowed to ask one question to Takenaka-san. I told him about the conclusion of the two sessions from yesterday. The conclusion of the first session was that there was a basic lack of democracy and diversity causing many of the problems and creating a resistance to change. There was not multiple points of authority, only one. The LDP. There was an inability to criticize power without fear of retribution. Plans are easy, but execution is difficult. Execution is left to the bureaucracy which gets in the way and prevents execution. Media and the bureacracy were the problem according to the first session. The second session yesterday blamed the lack of political will. When Takenaka-san proposed a very aggressve plan to take care of non-performing loans last year, the press slammed him and mostly reported the position of the bank heads. The bureaucrats were not supportive and the LDP tried to crush it. The interesting thing was the a poll on the Monex site showed that 87% of individuals were supportive of Takenaka-san's plan but that was not reported by the press. (reported it on this blog) I asked Takenaka-san whether he thought it was an issue of political will or whether he felt that the bureaucracy, media and the LDP actively got in his way and whether this was a significant barrier to execution.

He said that Diet was in session and that this was a very sensitive time. He made a good point that the silent majority was supportive and that it was important to empower them. Having said that, he dodged my question, but the fact that he dodged the question was partially not to screw up the Diet process which is quite complicated and important. I think part of it was fear of retribution. I think his inability to respond was a response in itself.

I AM THE FIRST SON OF MR JAMES BELLOY ,A FORMER DIRECTOR OF ASHANTI GOLD MILES COMPANY HERE IN SIERRA-LEONE.

MY FATHER DIED SOME YEARS AGO,AFTER HIS FUNERAL,MY MOTHER MRS JENNIFER BELLOY WENT TO MY FATHERS TRUNK TOGETHER WITH MY FATHER LAWYER.

THEY FIND A REGISTER WILL COVERED WITH MY NAME THAT I WAS THE NEXT KIN FOR THIS BOX.

THE SECRETARY IN THE[WSC]TOLD ME AND MY FATHER LAWYER THAT,WE SHOULD LOOK FOR A RELIABLE GOD FEARING PERSON WHO CAN HELP AS TO RECEIVE THIS FUND IN HIS COUNTRY,THATS WHY I AM SEEKING FOR YOUR ASSISTANT

PLEASE TRY AS MUCH AS YOU CAN AND HELP ME BECAUSE I HOPE YOU ARE THE ONLY ONE WHO CAN HELP ME TO TRANSFER THIS FUND, TO YOU IN YOUR COUNTRY.

THE SECRET IS THAT,PLEASE, PLEASE, PLEASE THE[WSC]DONT HAVE TO KNOW THIS,THIS SHOULD BE BETWEEN YOU AND ME,IF NOT, THEY WILL SEIZE THE BOX FROM ME

THE DIRECTOR OF THE WESTERN SECURITY COMPANY IS EXISTING TO HERE FROM MY FATHER PARTNER BEFORE HE CAN ALLOW THE FUND TO BE TRANSFERS,BUT SINCE MY FATHER DIED WE DON'T HERE FROM HIS PARTNER ANYMORE,THATS WHY I AM SEEKING FOR YOUR ASSISTANT.

I AND MY MOTHER PROMISE TO GIVE YOU TWENTY PERCENT OF THE TOTAL FUND IF YOU HELP ME TO RECEIVE THE MONEY THERE IN YOUR COUNTRY,I WILL SEND YOU ALL THE NECESSARY DOCUMENTS IF YOU ARE FULLY READY TO HELP ME.

MAY GOD BLESS YOU