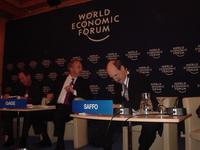 Yesterday I attended a panel about Nanotechnology. Paul Saffo was the moderator and Howard C. Birndorf of Nanogen, Mildren S. Dresselhaus of MIT and John Gage of Sun were on the panel. You could tell from the beginning that it was going to be a really difficult panel for Paul to manage. The topic was difficult, there were PhD's, investors and mildly interested CEO's of big companies in the audience. It was also clear that everyone on the panel had their own opinion about what they wanted to say. Paul tried to structure the discussion from a discussion about scale (Gage went into a description of powers of ten) to a technology discussion. I think he wanted wrap up with a discussion about applications. It sort of worked.

The technology discussion was a bit difficult for lay people. One person later described the session this way: It was like Milly dropped a stun grenade and the rest of the PhD's in the room were like Navy Seals who came in and took care everyone out. I think the panel quickly left many of the people behind. On the other hand, I was pleased because the technology discussion was quite substantive. Milly explained that real progress was being made in carbon nanotubes and in nanowires. She said that one of the problems as well as one of the interesting properties of nanotubes is that they can be either metallic or semi-conducting. The difficulty was that you couldn't control which you were making. It seemed like she liked the nanowires better. She said that you could put antibodies on the nanowires which would react when the antibody came in contact with the matching antigen. Lots of different antibodies on the ends of nanowires could be used to create a nanodevice to detect the presence of a variety of difficult to detect antigens. She also talked about nanolasers and quantum dots that can help you see the state of devices.

Everyone agreed that one of the biggest problems was how to interface with the tiny devices. Quantum dots and optical seemed to be a good idea. The Dean of engineering for Berkeley was in the audience and he explained that light moved slower around quantum dots and that this could be used to "store light" and could have a huge impact on optical networks and computing.

Some of the applications that people got excited about were RNA detection, bacteria that would manufacture nanotech devices, displays, computing... There seemed to be a myriad of medical applications as well. Having said that, it seemed like everything was about 15 years away and that the equipment necessary for research was still prohibitively expensive. Someone mentioned that Japan was leading in R&D spending on nanotech. Someone also said that maybe it could save the nano-economic recession. Someone else mentioned that the recession wasn't a nano-issue.

Later I was able to catch Milly in the hall and ask her what she thought about carbon nanotubes and hydrogen storage. She said that it was still quite difficult and it would require a breakthrough.

Interesting summary, Joi. I have spent a fair amount of time recently speaking with companies in this space, as well as some of the policymakers-to-be.

You alluded to one of the core issues - yield. Right now, a lot of companies are essentially making "sludge" and picking out interesting components. A few are beginning to have something resembling consistent yield and consistency of product. Based on what I've seen, there's a lot to be said for nanowires at this stage, and perhaps nanodots as well.

Some people seem to be able to make this topic accessible and interesting, and others have a more difficult time. If you ever get a chance to meet Dr. Mike Roco, with the U.S. National Nanotechnology Initiative, take it. I had the pleasure of speaking with him about nano futures for about an hour and a half and found myself hanging on every word.

Great post, Joi. I'm always eager to learn more about the state of nanotechnology. And I'm not surprised to see that you attended the panel. さすがは伊藤さんが参加しましたね。

I understand that nanotechnology potentially has many applications, but I've never heard whether or not it might facilitate the development of alternate forms of energy - the holy grail, if you will. I'm probably assigning way too much potential to this infant technology, but I am curious.

Perhaps I'm being way too simplistic, but these days, I'm beginning to think that the world has two basic options for the future. Either a)develop cheap, plentiful, and alternate forms of energy, or b) go to world war. I think Japan and America probably need to bear the main responsibility for making "a" happen. Excuse the blatant sychophancy, but I think Joi is one of the few people in Japan that can really champion that.

WITH DUE RESPECT I TRUST AND HUMILITY,IAM HERE CONTACTING YOU ON THIS BUSINESS THAT WILL BE OF MUTUAL BENEFIT TO ALL OF US INVOLVED.I KNOW THAT YOU WILL BE RECEIVE THIS MESSAGE AS A SURPRISE SINCE WE DO NOT KNOW EACH OTHER BEFORE,I GOT YOUR DETAILS FROM THE INFORMATION AND EXCHANGE CENTER HERE IN JOHANESSBURG CHEMBERS OF COMMERCE.
AND FOR THE PURPOSE OF INTRUDUCTION MYSELF,MY NAME IS MR.BARRY BONGANI,IAM THE CHIEF UDITOR OF AMALGAMATED BANK OF SOUTH AFRICA(ABSA).MY REASON OF CONTACTING YOU IS THAT THERE WAS AN ACCOUNT OPEN HERE IN (ABSA)IN 1992 I FUND OUT THAT NOBODY HAS OPERATED IN THIS ACCOUNT AGAIN AFTER GOING THROUGH SOME OLD FILES IN THE RECORDS I DISCOVERD THAT THE OWNER OF THIS ACCOUNT IS DEAD AND I DECIDED THAT IF I DO NOT REMOVE THIS FUND URGENTLY IT WILL BE FORFEITED FOR NOTHING,THE OWNER OF THIS ACCOUNT IS MR JACK B DEREK,HE IS A FOREIGNER AND A MINER AT KRUGER GOLD COMPANY HERE IN SOUTH AFRICA,A GEOLOGIST BY PROFESSION,HE DIED SINCE1991 NO OTHER PERSON KNOWS THAT HIS ACCOUNT HAS NO OTHER BENEFICIARY AND MY INVESTIGATION PROVED TO ME AS WELL THAT HIS COMPANY DEOS NOT KNOW ANY THING ABOUT THIS ACCOUNT AND THE AMOUNT INVOLVED IN HIS ACCOUNT ISUS$11.2M(ELEVEN MILLION TWO HUNDRED THOUSAND UNITED STATE OF AMERICAN DOLLERS).IAM CONTACTING YOU AS A FOREIGNER BECUASE THIS MONEY WAS DEPOSITED IN U.S DOLLERS AND THE FORMER OWNER OF THIS ACCOUNT MR JACK DEREK IS A FOREIGNER TOO.
IF YOUR INTERESTED TO HANDLE THIS TRANSACTION WITH ME,WE WILL SIGN A MUTUAL AND TRANSACTIN GREEMENT SINCE WE DO NOT KNOW EACH OTHER BEFORE BUT I ONLY CONTACT YOU BECUASE OF THE URGENCY AND THE NATURE OF THIS TRANSACTION,UPON YOUR CONSENT TO THIS TRANSACTION,I WILL THEN INFORM YOU OF THE NEXT STEP TO TAKE IMMEDIATELY FOR THE SMOOTH TRANSFER OF THIS FUND INTO YOUR NOMINATED ACCOUNT BANK IN YOUR COUNTRY FOR OUR MUTUAL BENEFIT.
I WOULD LIKE US TO MEET FACE TO FACE TO SIGN A BINDING AGREEMENT SO THAT YOU CAN RECIEVE THIS MONEY INTO YOUR FORIEGN ACCOUNT,I NEED YOUR FULL CO-OPERATION TO MAKE THIS WORK FINE BECUASE THE MANAGEMENT IS READY TO APROVE THIS PAYMENT TO ANY FORIEGNER’S ACCOUNT PROVIDE CORRECT INFORMATION OF THIS ACCOUNT WHICH I WILL GIVE YOU LATER.
I NEED YOUR STRONG ASSURANCE AND CONFIDENCE THAT THIS FUND WILL BE SAVE WHEN FINALLY TRANSFARED TO YOUR ACCOUNT PENDING WHEN I WILL TRAVEL DOWN TO YUOR COUNTRY FOR THE SUBSEQUENT SHARING OF THE FUND ACCORDING TO THE PERCENTAGE I WILL BE INDICATING TO YOU BELOW.I HAVE DECIDED TO GIVE YOU 25% OF THE TOTAL AMOUNT FOR YOUR ASSISTANCE AND 5% WILL BE FOR ANY EXPENSES THAT BOTH OF US WILL ENCURRED ON THE PROCESS OF THIS TRANSACTION AND 70% WILL BE FOR ME AND AND MY PARTNERS,YOU SHOULD ALSO BEAR IN MIND THAT THIS BUSINESS IS HIGHLY CONFIDENTIAL AND 100% RISK FREE TRANSACTION AND ALL THE ARRANGEMENTS FOR SMOOTH AND SUCCESSFULL TRANSFER OF THIS FUND TO A FOREIGN ACCOUNT HAVE BEEN COMPLEATED.I LOOK FORWARD TO YOUR EARLIEST RESPOND THROUGH MY TELEPHONE AND EMAIL ABOVE, THANKS FOR YOUR UNDERSTANDING AND GOD BLESS FOR YOUR URGENT REACTION.