Photos of tour of Chiba » 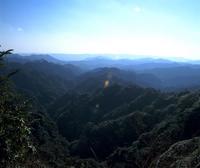 I just uploaded some photos that I took in during my tour of Chiba with Governor Domoto. This moblogging process was a bit more complicated than usual. I took my Hasselblad 205 FCC and most of my lenses. I shot both negative and positive film. I then processed them at a lab and had them scanned to PhotoCD format. I imported them into iPhoto, cropped them, enhanced some of them and uploaded them to my iMac web page from IPhoto. The worst part of the process was the PhotoCD part. I had read on the web that PhotoCD works well with negatives, but most of the scans turned out sort of washed out. On top of that, they cost more than $10 per photo to scan. (Still cheaper than professional scanning.) The iPhoto "enhance" feature worked well on the pictures with the busy pictures, but did not work with the pictures with simple objects and few colors. Anyway, if you're interested, the pictures are available as an .mac album.

This is the same process I used to get this shot and many others of the same kind. The PhotoCD process is slow and annoying but probably the best way to get good images from top-class gear (and the main reason to keep on using it when you also own a good digicam!).

I've had my fair share of slides digitized via PhotoCD, and let me tell you, it is ALWAYS a disappointment, especially if you've looked at your images with a proper slide projector first. And particularly disheartening considering how much each scan costs (though I must say, $10 a scan! Yikes! I thought San Francisco prices of $2/scan (100 images minimum) were outrageous.)

I don't know how long I've spent in Photoshop trying to color balance and curve and otherwise adjust the photos so they have some tiny resemblance to the original transparency. I noticed on yours the most common problem with PhotoCD, which is a certain magenta cast (particularly noticeable on the poppy field shots). But that said, the photos do retain a luminosity of actual film that digital has a hard time coming close to (doesn't mean one is better than the other, just that they each have their strengths and weaknesses). And I like the group shot at the TU forest, you behind the little seedling!

The normal PhotoCD's are a bit cheaper, but I have to use the Pro version to have the 6x6's scanned. Do you know if there is any difference between the labs in the quality?

I should go into photoshop and do that. I've been just using the enhance function in iPhoto which is better than nothing, but is limited.

There's flare... it appears as if you not using a lens shade?

Yes. I should have had a shade on. I had one with me. The biggest problem with this trip was that we were traveling with the Governor on a very tight schedule. 10 minutes here, 5 minutes there. I had 3 bags full of gear, but didn't have time to do things like put on my polarizer, put on the shade, etc. It was great training in hustling with my Hassleblad (I had my magazines on my belt, etc.) but not the best environment for getting perfect shots. But I can't complain. We got to see a lot of stuff I would not normally get to see.

There's an interesting page about PhotoCD written by Phillip Greenspun that you might like. I guess you've probably already seen it given your use of photo.net. I hope it's of use!

Personally I've been happier with PhotoCD than with Fuji Frontier scans I've had, because the Frontier scans have always been at a lower quality setting (despite my wishes). These have all been 35mm, so I don't know about 6x6. The newer Frontier machines might be able to scan 6x6", but then again you'd have to find a shop who has actually read the manual (my local Kitamura Camera sure hasn't). The Fuji rep I emailed with in NZ said that on the highest quality setting scans from 35mm negatives (rather than slides) should be great. However scans from slide film have always given better results than from negative film, so I now shoot slide whenever possible (at least until I can afford a used Nikon D100 body ;-)

I bet Photoshop's auto-levels will give you a better result than iPhoto by the way. Good luck!

Anyway, a lens shade is the cheapest means to improve anyone's photography... a wise man once said.