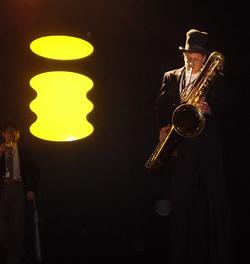 I went to work in a hurry yesterday, running late from blogging, not knowing what I was supposed to do that day other than I was supposed to be wearing a suit. I pulled a piece of paper out of my pocket after meeting with my accountant which told me I was supposed to go to the Tokyo International Forum center and meet Kenta. When I arrived, I was suddenly immersed in the i-mode of it all. It turns out that 5 of the i-mode council members were supposed to be on a panel to talk about how i-mode is changing society and where it goes next. It was the 4th anniversary of the launch of Docomo's i-mode, the widely popular Internet enabled phone.

Natsuno-san, who runs the i-mode project with the support of Enoki-san, his boss at Docomo, talked about the news phones including the new i-mode phone that will have fingerprint authentication built in. He also showed off flash running on the phones. The panel was short (1 hr for 5 people). I did get to admit to everyone that when Natsuno-san came to me with the idea that NTT Docomo would make an Internet phone over 4 years ago, I told him that I thought that there would be no way it would be successful. I thought that NTT would not embrace an open platform and that technically it was pretty sketchy. Well, I was wrong. NTT Docomo did, for maybe the first time in NTT history, embrace outside content providers and the sketchy technology turned out to be simple and much more easy for people to implement than WAP and took off.

The party was probably the most expensive-looking and BIG party I've been to since the bubble days. There were jugglers, guys on stilts playing huge saxaphones, lots and lots of food, plasma displays all over the place, art, etc. EVERYONE was there. Schmooze was in the air. The NTT Docomo exec team has special business cards printed for the event with special assistants following them around with a box of name cards as they went around and greeted their guests. Yup. Reminds you of the good old days. ;-p

All in all, it was a nice celebration for one of the few industries in the IT space doing well in Japan right now. For now...

I'd really like to see the Japanese blog updated more often - you're in a unique position to explain so many things.
PS: "I pulled a piece of paper out of my pocket..." a surprising low-tech approach to organizing your work!

Hi Uli. I try to do the Japanese, but just getting the English flow at a reasonable level is a full time mob. ;-)

Yes. The piece of paper.... My Clie and I have parted ways since I switched to OS X. One of the side-effects of switching is that none of the conduits to our internal network at the office are available for HotSync on OS X. I'm working on trying to switch the whole office so I can have a PDA again, but now I have to resort to having my assistant print my marching order on a piece of paper that she hands me when I go dashing out the door.

You have a lot of great information! Besides actually being in Japan for IT-related information, I think your blog is the next best thing!

I am thinking about switching to the Mac platform later this year. And, of course, I will be using OS X. I wonder if that will be a wise decision since everyone here uses a PC, except for one guy who has to work on a 15.2" PowerBook G4. How has the transition to OS X been for you? Any thoughts on the transition?

Thanks for a very informative blog!

Listed below are links to blogs that reference this entry: i-mode 4th anniversary party/panel.

TrackBack URL for this entry: https://joi.ito.com/mt/mt-tb.cgi/535

the i-mode 4th anniversary party was huge with jugglers, stilt walkers, saxaphones and mega-plasmas. i-mode on it's way out? Not likely.... Read More

the i-mode 4th anniversary party was huge with jugglers, stilt walkers, saxaphones and mega-plasmas. i-mode on it's way out? Not likely.... Read More