Banks try to use national ID, Ministry stops them » 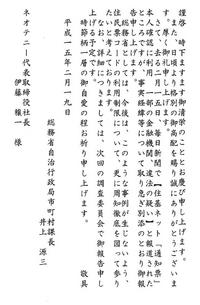 Recently banks began allowing people to use their basic resident ID code as a method of identification for opening bank accounts. This is exactly the "function creep" that I had been warning against and protesting in my activity against the basic resident ID code. I received a letter a few days ago from the director of local governments in charge of the basic resident ID code reporting that they have contacted the banking community and notified them that their activity was illegal and they should cease. (Sorry about the delay. I contacted him to make sure I could post a copy of the letter he sent me.) Yes! Nice job Inoue-san. If the Ministry of Public Management, Home Affairs, Posts and Telecom and continue to take a strong position to preventing the use of the national ID beyond the original scope and stick to the law that they drafted stating such, it would be a great thing that could let them turn all of the negative publicity of the national ID into positive publicity. I hope they stick to their guns and prevent other Ministries from using the basic resident code.

Many of my skeptical friends warn me to be wary, but I have to applaud positive acts for what they are. This was a great first step.

Listed below are links to blogs that reference this entry: Banks try to use national ID, Ministry stops them.

TrackBack URL for this entry: https://joi.ito.com/mt/mt-tb.cgi/539

The Days After the Official Launch from Anti National ID Japan
December 19, 2003 2:01 AM

The Days After the Official Launch from Anti National ID Japan
January 8, 2004 11:36 AM