Dave Winer on mood of the conference » 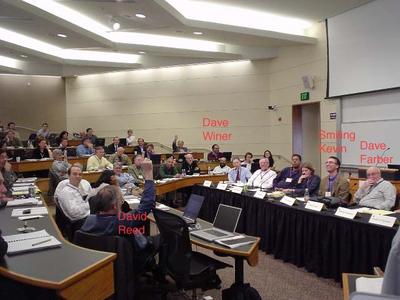 Dave Winer
Kevin Werbach did a kickass talk. Interesting, packed with info, passionate. But the rest of these guys are part of a fraternity, they talk about things that mean nothing to me. I'm a stranger here. I don't get it. Kevin came from this place to software. This is where he shines.

I feel this too. As Dave mentioned, Kevin is someone who left the FCC and came to the software world.

Someone from the FCC just said that they were part of the physical layer. Maybe it's this physical layer attitude, maybe it's the proximity with the government... There's something about the smile on Kevin's face and the sparkle in the eyes of the software guys clashing with the bit more serious looking and complicated arguments from the FCC guys which makes this feel more like a struggle between a community of software people vs. a community of physical layer folks.

You know you are very right about Kwevin's smile.It is really warm and optimistic even clashing with those of those guys from the phisical layer, those who are so close to the government an so on and so forth. Kevin is going to symbolize the epoch and they...still a bunch of beauracrats and professional speechmakers apt to do a thing or two.

Listed below are links to blogs that reference this entry: Dave Winer on mood of the conference.

TrackBack URL for this entry: https://joi.ito.com/mt/mt-tb.cgi/551

"Spectrum policy is undergoing a fundamental reorientation in the United States and elsewhere. An emerging consensus holds that the traditional system of governmentally-allocated spectrum rights inhibits innovation and competition.... Read More