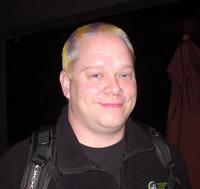 Yesterday, I had dinner with Robert Kaye. He is the founder of Musicbrainz. Musicbrainz is a metadata project that is creating a database of album artist, title and track information similar to how CDDB used to do it when they were not a corporation. Many people were upset by CDDB's move use the commons created by the community for commercial purposes. Robert was so angry with this betrayal of the community that he started Musicbrainz. Musicbrainz will be set up as a non profit and Robert swears that he will never "sell-out". In fact, we talked about using some sort of emergent democracy that would allow the users to force a way to take shift control in the event that something like this might happen. We talked about the value of such escrow agents of perhaps the DNS and domain name with some sort of tool to allow the users to discuss and trigger a shift in control. This could be a way to force projects like this to stick to their original principles and help build trust at the same time.

Robert seemed like an extremely dedicated, smart and visionary guy and I think his focus and commitment to deliver this service is extremely admirable.

His service is unique in many ways. He is using a sound fingerprint key method to identify the songs. (He got beat up a bit on slashdot because he was using patented technology for this, but I think this is fine. He can always switch later if someone decided to make an open source version.) Basically, his client software scans all of your mp3's looks them up on his database and fixes all of your bad tags. If you have data that isn't in his database, you can submit it. It is a much more automatic and viral approach to what CDDB does.

So far it is only available on Windows, but he's working on an OS X version now...

Ever since the Wired article came out, his server has been swamped so you may not be able to access it... But keep trying and donate some money so he can buy a new server. Thanks for the intro Lisa!

I met robert at codecon and was greatly impressed by his vision and progress. The existing client app is cool, and his plans for a library that allows other clients to incorporate musicbrainz tech is potentially revolutionary. I'm only worried about the patented fingerprinting technique to the extent that it forces a centralized repository, and the already apparent effects that has on scalability.

hopefully, he'll give a talk next year.

I've been using freedb.org (GPL) ever since cddb turned into gracenote. It seems a shame that musicbrainz is trying to recreate a DB that freedb's been building for years. Maybe there's some kind of collaboration that can happen there.

I also use discogs.com but that's more specific to electronic music and also catalogs vinyl.

Gen Kanai-
the thing about freedb is it's an outright mess. also MusicBrainz goes way beyond anything that freedb offers. MusicBrainz catalogs vinyl as well.

Listed below are links to blogs that reference this entry: Robert Kaye from Musicbrainz.

TrackBack URL for this entry: https://joi.ito.com/mt/mt-tb.cgi/558

My MP3 collection is a mess. I have a bunch that are missing information on song name and which albums... Read More