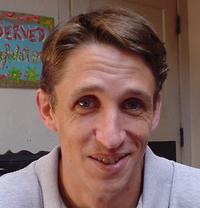 Had lunch with Ross Mayfield yesterday. Ross wrote a piece called The Ecosystem of Networks which described the three different networks: the political network, the social network and the creative network. This piece provided an essential framework for my paper on Emergent Democracy. (To give credit where credit is due, Ross coined the term "Emergent Democracy" here.) Ross and the SocialText crew also provided much of the essential infrastructure for the first "happening" on emergent democracy. Those of you who want to hear more about SocialText will probably hear more about it at the PC Forum.

Anyway, it was the first time to spend time on-on-one with Ross and great to meet a person who has a healthy balance of academic, public sector and business interests. Something I strive to balance myself.

you do have that balance :)

Good synergy, Joi and Ross. Let's do proceed to a set of clearly-defined requirements.

Listed below are links to blogs that reference this entry: Lunch with Ross Mayfield.

TrackBack URL for this entry: https://joi.ito.com/mt/mt-tb.cgi/568

The Ecosystem of Networks I just found Doc Searls website somehow stumbling across it on my way across the web. This is some amazing stuff. From Doc's site I found Joi Ito's site and from there I found Ross Mayfield's Read More