Breakfast with Keiko Higuchi who is running for Governor of Tokyo » 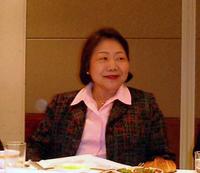 I was invited to a breakfast with Keiko Higuchi by Merle Okawara. Ms. Higuchi is an outspoken anti-war feminist who was one of the first people to try to deal with the aging population issue in ernest. She is running for the office of the Governor of Tokyo as an independent against Shintaro Ishihara, the current Governor of Tokyo. She is characterized as a anti-war liberal and Ishihara is a well known nationalist.

John Nathan on Shintaro Ishihara
Ishihara is an outspoken nationalist who rails against the United States and China and the central government. It is well known that he claims that “fifty years of subservience to the interest of the United States has deprived the Japanese of a national purpose and engendered a paralyzing identity crisis. And he reminds his countrymen that theirs is the only non-Caucasian society to have created a modern superpower.”

Ishihara is a well known writer who is able to capture the hearts of many Japanese with his catchy slogans and easy to understand policies that address many of the issues facing the average Japanese today.

Ms. Higuchi will have a tough fight being characterized as a soft philosophical peace-loving woman. Ishihara is talking about ramping up the police force to stomp out crime (especially those committed by foreign immigrants) and is supportive of increasing the military power of Japan. The war on Iraq will probably have a great deal of impact on this election.

Governor Domoto of Chiba also ran and didn't expect to win, but she did. Having assumed she was going to lose, she didn't promise many favors and thus she is relatively free and independent, having won. It would be great if Ms. Higuchi could win and displace Ishihara. She'll need some strong and smart advisors to help her execute, but having a woman Governor with a left-leaning disposition would probably be a good thing in light of the current atmosphere.

Ms. Higuchi outlined her philosophy this morning and I was happy to hear that she felt that democracy was broken and that the voice of the people as well as the ability for communities to organize and be heard in government was lacking and she intended to increase the diversity of opinions heard by lawmakers.

I talked about blogs and emergent democracy. (Of course)

These "anti-war" local-office candidates really slay me. In the morning at my station I pass all these candidates blaring out their anti-war slogans, even though they are running for local ward and city offices.

Who cares whether their dog catcher is anti-war or not? Their job has nothing to do with setting Japan's military policy. If you're running for the national Diet, fine, but Ms. Higuchi should be talking about raising the ridiculously low property taxes in Tokyo or outlawing open burning or trash and plastics or whatever else she might actually be able to do something about that would improve the city.

Do you remember Ishihara's speech to the Self Defense Force? He told them that in the event of an earthquake in Tokyo, they may be called upon to keep the peace and take care of foreigners who may loot and cause crime. He actually did a military exercise in Tokyo as a show of strength.

Having said that, I have to agree that many of the candidates are over-doing it and local offices have little to do with the military. It's just that if you're running for Governor against Ishihara who is quite right-wing, you end up looking like a pacificist.

I think it's less about war and more about nationalism vs. embracing diversity.

Maybe this is my Gaijin-ness talking but do foreigners really cause the crime?

I'm not saying that foreigners are not involved in crime but, I think it's all too easy to piegonhole the entire crime problem to the foreigner population.

Anyway, I was pointing out the folly in talking about this, not trying to stress it.

Although I no not agree with all of Ishihara's views or political policies, he deserves a lot of credit for what he has done for the city of Tokyo since becoming mayor. For example, he has probably accomplished more than any other politician in recent times in trying to address the fiscal problems of his constituency (although Tokyo still has a long way to go...).

I think Ishihara's effectiveness is tied to the fact that he has tremendous political clout yet does is not "owned" by any interest groups. I have serious doubts that any other candidate running for mayer would have this combination of assets.

Shane. Very pragmatic view. I agree that some of the stuff Ishihara has done have been positive and he does show leadership. I guess the issue is at what expense. Also, some of the stuff he talks about seems to be more for show than true effect. For instance, what is this "Bank of the City of Tokyo" idea all about? Sounds good, where is the money?

Also, like Domoto-san, I have a feeling that Ms. Higuchi also does is not "owned" by any interest, although she probably doesn't have as much political clout. I think that was the key for Domoto-san's free hand right now in Chiba. That she didn't get a lot of support from any particular interst.

By the way, we're not talking about just allocating dog-catchers here. Chiba has 6 million people. Maybe around the size of Sweden. Singapore is around 3.5 million. Tokyo has 12 million people. We're talking large governments albeit, "local".

BTW, the report we recently issued from the Association of Corporate Executives pushes for local taxes to be increased and central government taxes to be decreased. I/we believe that more and more control of the budget and government services including education should be left to local government control. This is quite a tough battle, but one I think makes more sense considering the governance structure of local governments. (They are more transparent and the responsibility and the control lies in the governor vs. the more opaque and party policy driven structure of the central government.)

I'm looking for Keiko Higuchi. She married with Sasaki and she is from Aichi.
Can you help me?
I'm her friend
Silvana Goldemberg

I'm looking for Keiko Higuchi. She married with Sasaki and she is from Aichi.
Can you help me?
I'm her friend
Silvana Goldemberg