Lunch with President Roh of Korea » 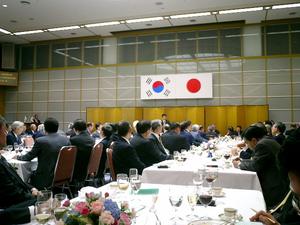 President Roh of Korea is visiting Japan and I was invited to attend a lunch with him today. He has been in office for about 100 days and was widely reported as being the world's first "Internet President". I wrote about it in Feb. Since then, his popularity has gone from about 60% to 40% because of difficulties in execution of domestic financial policy and constantly changing positions on the US and other issues. His trip to Japan was also very controversial back in Korea because Japan just passed a new law broadening the powers of the Japanese military's ability to defend itself on Friday. Former victims of Japanese military occupation are very negative about any expansion of the Japanese military.

I was very interested in how the Internet would play a part in his leadership and deliberations so I was anxious to meet him and ask him about Emergent Democracy. Unfortunately, the "lunch" turned out to be a pretty formal and huge lunch with 150 business leaders. There was only time for two questions and the people asking the questions were already pre-chosen. The discussion focused around free trade, helping each other's economies, China and about Korea trying to become a hub for Asia and a railroad gateway to Europe.

Mark Norbom, the CEO of GE Capital was at my table and I hadn't seen him for a long time so that was nice. Also got to see Chairman Nishimuro of Toshiba who I'd also not seen for a long time. Other than generally schmoozing around, it wasn't much fun and there definitely wasn't any emergent anything going on as far as I could tell.

and who is president koh??

He is the President of Korea.

I guess it was just a typo of Joi's part.

One thing I don't understand is why president Roh Myon-hun's name is
pronounced "No Mu Hyon" in Japanese. Is the Japanese pronunciation closer
to the true Korean pronunciation? But then again the Korean themselves
transliterate the character 盧 as "Roh". Are there any Korean speakers out
there who might shed some light on this?

Lucky for me that MT lets me edit my posts. ;-) My apologies President Roh!

In Korean some initial consonants are pronounced differently than when they occur in the middle of words.

This is the way it is actually pronounced in Korean. There are a lot of sound changes like this in Korean, much more common than, but similar to, what you see in Japanese (e.g. ippiki, nikiki, sambiki).

The difference is that in Japanese you spell out these differences with kana, whereas in Korean, things are written a standard way and simply pronounced differently in speech.

I'm just glad to see so many women in the audience. Looks very representative....

Did you get to speak with President Roh?

Gary. Yeah. There were probably 3 women there...

Mike. No I didn't get to talk to him. I had hoped I would have. There were too many people and he was heavily guarded by body guards so if I made run for it, I'd probably have caused a commotion. ;-)

Noh Moo Hyun is more like it. Roh beceause Romanization of Korean alphabets.

I don't know much about EmergentDemocracy. I live in one for many years, namely US. Democracy can't be supported without free market which is alien to most.

I am sure he has much more on his mind than that like how he needs to get himself out of the sling.

He "patched" himself up with Bush. Bush being a radical and of narrow interests, he must harbor what these small guys did during the war. Unfortunately, they don't forget, especially the hawks. They did not forget since JFK. Where is Rumsfeld putting his foot in his mouth?

The question I like to ask you is when you think Japan will be a democracy.

As I've said before, Japan's democracy is completely dysfunctional.

Joi, Its a shame that you didn't get a chance to ask your questions. Yes, Korea's high rate of Internet usage is interesting. Still, given the chance, I think that I would have asked him a very different question. "Why doesn't South Korea take North Korea more to task for their terrible human rights violations, which are the worst in the world?"

Its a huge killing field up there in NK and Roh is doing his very best to ignore it. That, to me is absolutely disgusting, especially coming from a 'former human rights lawyer'. If THIS isn't a *pressing* human rights issue, *what is*?

I realize that to many of the more naiive and immature South Koreans, most who grew up in an atmosphere of rabid right wing extremism, there must be some illicit allure to thumbing their nose at the conservatives and embracing North Korea.

However, its a huge mistake. An absolutely terrible one. Kwangju was more than 20 years ago, but Kim Jong Il is killing thousands of people a day.. right now..

I just hope that Roh sees the folly in coddling a mass-murderer.. before its too late..