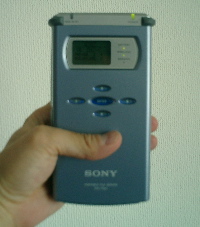 I just got my Sony FSV-PGX1 Portable File Server. It's an interesting device. It a little linux box that can run on batteries. It has nfs, samba, telnet, http and ftp. It has a 20G HD. There is a web interface or you can set it up with the little lcd display and arrow buttons on the box. If you get the cradle, there is an ethernet connector. The box has 802.11b built in. It's basically a file server. It can be set up as a DHCP access point, DHCP client or fixed IP address on both the ethernet and/or the wireless ports. It can be some sort of "bridge" although I haven't figured that out yet. Obviously many uses. Too bad it doesn't do rendezvous.

I just got a stiffy. How much do those puppies run? It's kinda small compared to my firewire drive but I've got gadget envy.

Yeah, how much did it run? I've been loving my Martian server for the past few months, mostly because it does have rendezvous support (which has all sorts of interesting uses). But the martian is a bulky (but silent) computer box that isn't very portable. The Sony looks much cooler, almost as small as an ipod.

802.11b and a webserver in your hands that runs on batteries? There ate a shitload of hot little options with that. Flashmob alerts. Travel to point X on the map and point their browsers to 192.168.1.138:666 to get directions to the next meeting. Put a dozen of those around town for a bitchin wifi treasure hunt. You can have fun with that thing. Pop that in your pocket and run a wiki on it. Set it so only people in your airspace can post. Man I need one.

If you have root acces and a compiler, then you can add Rendezvous using this code code plus some configuration.

Wow, it actually exists. Back in February when there was all that talk about this thing, I thought it could be a great distributed media server for Sony. But now I just want one for my backpack. Portable micro-broadcasting; immediate neighborhood pirate radio.

How long until someone (like Joi) shows up at a conference with one of these things and makes handouts truly a thing of the past.

Jason, the PGX1 can't actually run for very long on its built-in battery -- the latter is only intended to provide a mini-UPS function, powering an orderly Linux system shutdown after a few minutes when mains pwoer failure is detected.
The PGX1 even has a mini cooling fan, and is thus really a bona fide server designed for a wired environment with access to mains power, and where its optional ethernet cradle can be used e.g. to bridge wireless and wired LANs.

I'm sure it wouldn't take a dedicated hacker very long to take the device apart and mount the mini-IDE disk -- using e.g. a portabe Firewire HD enclosure -- on a Linux system. It would then be wasy to alter a few /etc/rc scripts to enable telnet and root access... :-)
I wonder what CPU the PGX1 is using, and if the system is running an Apache httpd... MovableType on the PGX1, anyone?

What's the HD in it. I got a 60 gig FW drive about the same size when I was in Hokkaido last winter. It was the only portable in the store up there in the hinterlands, so I had no choice. It has some new fujitsu HD that my mac Guru tabiwallah told me was top notch.

Anyone seen these new puppies... (the Sony FSV-PGX1 Portable File Server that is) in the US or Canada? I could replace my old big honking Dell server with this and be ahead of the game. That's a cool tool.

MostlyVowels is right. The batteries in the PGX1 are only for backup. It is not truly portable...yet.
Feel free to drop me any future feature requests. I can get them to the right folks ;)

Also, Intel's Personal Server was discussed broadly a few months ago. Worth noting.
This niche is heating up quickly.

this device is not "just out". you guys should have realized this was out a long time ago.
no special order. walk in walk out with it.

It's kinda cool and geeky, but what use is it, really?

Then really compelling use I can think of for it is for an in-car server, hidden in the boot or inside the dashboard. It could pick up files (like the latest mp3's) when it's in the driveway at home, or it could disgorge queued email when it passes a Starbucks or other wireless access point. You get your power from the car battery, and it would switch itself off a few minutes after the key is taken out. You could have a separate computer, maybe an ipaq or similar to listen to or view the content.

As Niji says, this has been out for awhile. I think they announced it in Feb or something. You can google for it for more info. I just ordered mine thru www.yodobashi.com. If they've got it, everyone's got it. ;-)

I've been messing around with it some more. Found out that you can turn on telnet and log in and "su" as well. A few more facts...

The thing runs on batteries for up to 9 minutes. I can't see why needs to consume more power than a PDA with an 802.11b in it so it would be nice if they could find a way to lower the power consumption and increase the battery life to something more reasonable... Like 24 hours. ;-)

here is the dmesg file for the gory details. The CPU: Cyrix Geode(TM) Integrated Processor by National Semi stepping 02.

i'm sure you could plug it into one of those auxiliary laptop battery thingies. what's the input voltage?

Oo. Someone over at Hirata's blog has already installed MT on this thing. I'm going to do that too. Then I can have a REAL "moblog." ;-)

Really could do with buying one fo them beasts - any chance they'll ever come to Europe or worse case USA??

Really could do with buying one of them beasts - any chance they'll ever come to Europe or worse case USA??

Do any of you guys know how to hard reset this thing? I picked up a working unit from the trash, but it keeps asking for a password... maybe there's a manual online?

Listed below are links to blogs that reference this entry: Sony FSV-PGX1 Portable File Server.

TrackBack URL for this entry: https://joi.ito.com/mt/mt-tb.cgi/828

Sony makes some cool stuff gosh I love that company. There latest cool product has me excited. I am going... Read More

Sony makes some cool stuff gosh I love that company. Their latest cool product has me excited. I am going... Read More

Sony has a portable 802.11b file server available in Japan. In addition to supporting most major file protocols (CIFS/SMB, NFS), it can also act as an ethernet bridge. You can also install any other Linux software you can get your... Read More

Apple are selling 2-3 iPods a minute over the past few months. However these must be largely sales to new people. If you bought a first and second generation iPod, then the first generation 5Gig are upgrade candidates, but the 2nd generation Read More