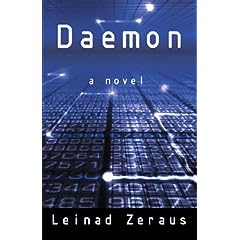 Years ago, I remember thinking about Multi User Dungeons (MUDs) and how much they affected people in the real world. I knew people who were obsessed with MUDs, the first Multi-User Online Role Playing Games (MMORPGs). I was obsessed. (I think the first time I ever appeared in Wired was in 1993 when Howard Rheingold with Kevin Kelly wrote about MUDs and mentioned my obsession.) In MUDs, people got married, people got divorced, people lost their jobs, people shared ideas... The MUDs I played touched the real world through all of the people in the game.

Unlike the World of Warcraft and more like Second Life, MUDs allowed players to create rooms, monsters and objects. When you entered a MUD, it was like entering the collective intelligence of all of the people who played the game. There were quests that were designed by people using their knowledge of Real Life™. Playing in their worlds was like walking through their brains. These worlds merged and collided as people from everywhere collaborated in creating MUDs of various themes with various objectives.

At some point in the evolution of MMORPGs, MUDs forked and we ended up with most of the people who liked creating objects and worlds in places like Second Life where, while you CAN make games, most of what happens is world creation. The "gamers" ended up in games like World of Warcraft where the game play aspect has been honed to a fine art, but the player content creation aspect has been completely lost. (Although most of the developers are former obsessive players.)

What I envisioned back when I was playing and hacking MUDs more was that if you turned the world a bit inside out and imagined that YOU were the MUD, the people who played your game were like little pawns or interfaces for you in the real world. They inputted content and created worlds and taught you about the real world. They promoted you to their friends. They played obsessively increasing experience points and commitment to the game so that they would forever feed you and keep you alive. They would set up servers and pay for hosting just to feed their obsession and protect their investment. If you became extremely popular, a group of your players would spawn a new MUD with your DNA-code and there would be another one of you.

The hardcore players would hack your open source code and keep you evolving. The Wizards would educate and add character to each instance of your code. The players would be your footprint in Real Life™.

When most of the gamers moved to corporation owned closed source games designed by a team of developers, I stopped having this dream. The games were no longer "alive" in the same way I had envisioned them evolving.

After reading DAEMON, this dream is back. Leinad Zeraus depicts a world where a collosall computer daemon designed by a genius MMO designer begins to take over the world after his death. In many ways, the vision is similar to the vision I had, but the author adds a macabre twist and many many more orders of scale to make this one of the most inspiring books I've read in a long time. The author is "an independent systems consultant to Fortune 100 companies. He has designed enterprise software for the defense, finance and entertainment industries." He uses his experience to make the book extremely believable and realistic and still mind-blowing.

It was super fun to read and is a book I'd recommend to any who loves the Net and gaming. I'd also recommend it to anyone who doesn't. It's a great book to learn about the importance of understanding all of this - before it's too late.

When I read your post I think immediately about free Ultima Online servers. Open source hackers created their own versions of the UO servers on which you play using the original game client. The cool thing is that those servers have in some areas surpassed the official servers and you as a player also have much more influence since there is usually a few gamers behind running each server rather then an army of mindless drones.

Also Ultima Online allows you to actually leave a mark in the world by placing your house around the world and decorating it with furniture and artifacts that you have obtained in various ways or created yourself. All players that pass by your house will see it and also see some of work you've put into (or not put into) decorating your house.
Also you can make an impact by crafting weapons and armor and marking these items with your name so when examined it would say "a broadsword exceptionally crafted by Some Dude".

While I have never been big on MUDs, I feel that Ultima Online is today as close as you can get to an MMORPG game where you can be a Gamer and a Creator at the same time.
(I think Star Wars Galaxies offers some of this, but I am not sure how that works).

Dimitri: I played UO a lot in Spain, as you said, the unofficial servers where much more popular than the official. We choose the server to play depending on the reputation of the people who was controlling it. After some time, the boss of my clan in my university decided we should run our own UO server. The server was a Pentium 75Mhz running in friends dormitory room plugged to the University routers using coaxial 10Mbps. It was perfect until there were so many people joining to our server that the University realized we were using "research bandwidth" for "playing".

I loved UO because of the Gamer-Creator mix you commented, I loved being a Creator in UO. I also loved creating the rules for the world when we run our server, it felt like being a GOD. I also played some Star Wars Galaxies but the balance among Gamer-Creator was not so good.

Thanks for the intro. Will definitely et the book. Just got into Second life and trying to get the hang of it.

Thanks. I'll order the book wishing the dearm is back!
Not only Vernor Vinge, the great novelists in our age give our dream a vivid metaphor.
I remember the Japanese novel "The S.O.U.P" (http://www.amazon.co.jp/dp/4043748019) in 2001 by Hiroto Kawabata, Japanese novelist and nature writer.
It was an another science fiction of the genius MMOG developer and artifitial life at the time of UO and also the alternative history of the Internet (U.S. president talks about the role of ICANN in the virtual world of this novel:-).

Heh, I read this book a few weeks ago and yes, as a result, I went back spending some time on WoW and Second Life.

Hi there. I'm writing from Germany 10 years after the original post. I first read Daemon and Freedom TM (or Darknet, which is it's name in Germany) a few years back and was hooked imediately. And even now I think Daniel Suarez didn't over- but rather under-estimate the evolution of technology. Looking around what is possible with todays IT you really can get scared.

But what these books made most believable in my eyes is the inclusion of the human factor into the equation. The Daemon didn't only put itself on all computers he could find (like Skynet) but also was installed by fellow human combatants. Of course it was an allmighty machinery (or Enterprise, like one of the protagonists put it), but it allways had humans who helped it: spread, evolve, getting used.

This I put against other plotlines: mostly betrayal or something like this; Matrix comes to mind. It's refreshing, that humanity not only is there to set the Machine free or betray other humans but is an integrated part of it.