The Future of Work in the Age of Artificial Intelligence » 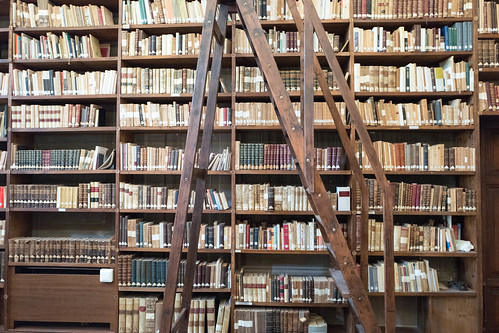 The library at the Minerva Priory, Rome, Italy.

I recently participated in a meeting of technologists, economists and European philosophers and theologians. Other attendees included Andrew McAfee, Erik Brynjolfsson, Reid Hoffman, Sam Altman, Father Eric Salobir. One of the interesting things about this particular meeting for me was to have a theological (in this case Christian) perspective to our conversation. Among other things, we discussed artificial intelligence and the future of work.

The question about how machines will replace human beings and place many people out of work is well worn but persistently significant. Sam Altman and others have argued that the total increase in productivity will create an economic abundance that will enable us to pay out a universal "basic income" to those who are unemployed. Brynjolfsson and McAfee have suggested a "negative income tax"-a supplement instead of a tax for low-income workers that would help the financial redistribution without disrupting the other important outcomes generated by the practice of work.

Those supporting the negative income tax recognize that the importance of work is not just the income derived from it, but also the anchor that it affords us both socially and psychologically. Work provides a sense of purpose as well as a way to earn social status. The places we work give us both the opportunity for socializing as well as the structure that many of us need to feel productive and happy.

So while AI and other technologies may some day create a productivity abundance that allows us to eliminate the financial need to work, we will still need to find ways to obtain the social status-as well as a meaningful purpose-we get from work. There are many people who work in our society who aren't paid. One of the largest groups are stay-at-home men and women whose work it is to care for their homes and children. Their labor is not currently counted toward the GDP, and they often do not earn the social status and value they deserve. Could we somehow change the culture and create mechanisms and institutions that provided dignity and social status to people who don't earn money? In some ways academia, religious institutions and non-profit service organizations have some of this structure: social status and dignity that isn't driven primarily by money. Couldn't there be a way to extend this value structure more broadly?

And how about creative communities? Why couldn't we develop some organizing principle that would allow amateur writers, dancers or singers to define success by measures other than financial returns? Could this open up creative roles in society beyond the small sliver of professionals who can be supported by the distribution and consumption by the mass media? Could we make "starving artist" a quaint metaphor of the past? Can we disassociate the notion of work from productivity as it has been commonly understood and accepted? Can "inner work" be considered more fruitful when seen in light of thriving and eudaemonia?

Periclean Athens seems to be a good example of a moral society where people didn't need to work to be engaged and productive.* Could we image a new age where our self-esteem and shared societal value is not associated with financial success or work as we know it? Father Eric asks, "What does it mean to thrive?" What is our modern day eudaemonia? We don't know. But we do know that whatever it is, It will require a fundamental cultural change: change that is difficult, but not impossible. A good first step would be to begin work on our culture alongside our advances in technology and financial innovations so that the future looks more like Periclean Athens than a world of disengaged kids with nothing to do. If it was the moral values and virtues that allowed Periclean Athens to function, how might we develop them in time for a world without work as we currently know it?


* There were many slaves in Periclean Athens. For the future machine age, will be need to be concerned about the rights of machines? Will we be creating a new class of robot slaves?

Periclean Athens was a slave society, as have been most social orders in human history. Is the author considering that machines replace the underclasses? This would definitely re-order our social outlook, but would it be unsatisfactory? Is the need to dominate our fellow human beings essential to humanity?

There are more app developers than there are farmers in the U.S. today.
App developer as an occupation didn't exist 8 years ago (in its current incarnation)

Prepare for double digit Dow returns from automation, and double digit unemployment. Cory Doctorow's whoofie points as currency for creative work, combined with some sort of basic income provision seem like the only reasonable way to maintain an even keel for society moving forward.

I was a bit off-put by the footnote re Periclean Athens, in how rapidly you moved from noting a past gross inequity, to speculating on what would seem to be a silly hypothetical. So long as machines are machines, i.e., the question of "do they *want* to do what they do?" is nonsensical, then there's no issue there. If somehow machines become capable of feelings, and feel like what they're doing is not what they're wanting to do, I suspect the world will have been more vastly changed on many fronts...

But I don't think we get to use Periclean Athens for much of a data point, just as we wouldn't debate the need for self-driving cars for royalty, given that they all have chauffeurs, darling!

Someone (on NPR?) noted that dogs have survived the transition from necessary work to leisure, given that most dogs had working roles a hundred years ago. In a world of less necessary work, if we can address how to tax and spend such that no one starves, we could all live a dog's life, so to speak. As a cautionary other side of the coin, I give you horses... the US horse population was about 20 million in 1915, and less than a quarter of that by 1959 (USDA census). Horses and people require a good deal more upkeep than dogs...

Agree that Periclean Athens was traditionally thought of as the apogee of democratic ideals. But it was based on a society of approximately 100,000. More's Utopia was posited on a tiny island. The closest anyone has come to scaling such ideas is the USA-and we may be seeing its implosion, in part from size demographics. (Anyone try to visit the White House to complain about personal issues as in the time of Lincoln? Or try to shake the President's hand and say a few words on New Year's as with TR? The concept of an electoral college was very different when you likely knew the electors personally, etc.)
But even if AI can allow us to expand an improved [e.g., no human slaves] idealistic society, you need to get to that future point. The interim elimination of repetitive motion-and then many if not ultimately most other-jobs, without providing substantial re-tooling education for those with the aptitude and social safety (whether wel- or work-fare) nets for the rest will lead to increased unemployment and likely civil unrest in time. It is not just a basic income guarantee; people don't want a handout, they want to work. But they need to be able to afford the cost of the tools that produce the revenue. If those tools are smart machines, only those who can afford the machines will prosper. Accordingly, until we revamp our educational systems to provide sufficiently technical training paths (along with regular upgrades and refresher courses, but without the need for a college degree, particularly in arcane subjects) we will have great difficulty in reaching that promised future.

AI at work is inevitable. Ross's cautionary remark makes me also realize how serious it can be. Given the rate at which technologies move, AI at work may be closer than it is generally thought to be. I believe that AI will be an extended phenotype for many humans (and also animals) and then there will be some who would refuse to accept it
(or will be unable afford it) as an extension of themselves. But then there are so many different scenarios possible. It would be interesting to run a toy simulation.

The question "Do robots think ?", may turn out to be equivalent to "Do ant colonies think?" and "Do human beings think?".

Play time could be rewarded instead of work time.

As with so so many thing, Isaac Asimov worked this out many decades ago. To wit, the Robot novels world of Solaria: