My email and task management protocol » 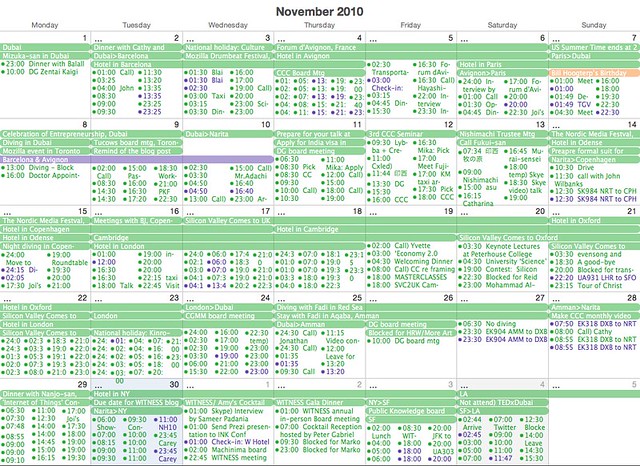 The last blog post I wrote was about how little time I have to do email and the difficulty in coping with it. Often when I meet new people, they quickly take a look at my blog and read the top post, which in this case is a whiny post about how busy I am - fine, but not exactly the most exciting place to start a conversation. The fact that I haven't written anything really interesting on this blog since then is a testament to the fact that I haven't solved my "busy problem", but I thought I'd give you an update on the somewhat improved state of things.

After the last post, Ray Ozzie pointed out in the comments that I was looking at the problem the wrong way. Instead of trying to allot partial attention to doing email during meetings, he suggested I should instead figure out how to effectively process email where the input and output flows are balanced. I took his feedback to heart and have embarked on trying to make my inbox processing more efficient. In case it is useful for people, here are a few protocols that I've instituted.

While I don't get to inbox zero every day, I get to near inbox zero at least once a week. I feel that I'm mostly on top of things, and if I'm unable to do something or meet someone, it is because I really am unable to do it, rather than just accidentally missing it. This feels much better.

My next step will start after the new year, when I'll start scheduling exercise, learning and "mindfulness pauses" into each day and pushing my bar for saying "yes" to requests much higher to try to make room for this.

So far, I've implemented the following steps, which you, too, might find effective:

My signature file says, "Tip: Use NRR to mean No Reply Required - thank you!", and I've tried to make it a "thing" for my associates to let each other know when you are sending a message that doesn't need a reply. This cuts down on the "thanks!" or "OK!" type emails.

I use Sanebox which is a service that sorts your email behind the scenes into various folders. Only people who you have written email to in the past or people or domain names that have been "trained" end up in your inbox. You train Sanebox by dragging email into different folders to teach it where they should go or you can program domains, or certain strings in the subject line to send the message to a particular box. I have four folders. "Inbox" which is where the important messages go, "@SaneLater" where email from people I don't know go, "@SaneBulk" where bulk email goes and "@SaneBlackHole" where things go that you never want to see again.

Gmail has a nifty feature that allows you to give access to your inbox to other people. Two people have access to my inbox to help me triage and write replies. They also keep an eye on "@SaneLater" for messages from new people who I should pay attention to. Requests requiring actions or replies that are substantial go to Trello. (More below about Trello.) Information requests, requests that need to be redirected to someone else, or meetings that I can't possibly attend get processed right in my inbox. Email that needs a reply but won't take more than a few minutes ends up getting converted into a ticket in Keeping and assigned to whoever should be involved. (More on Keeping below.)

We have a Media Lab Slack channel and any interaction that can be settled on Slack, we do on Slack and try not to create email threads.

Trello is a wonderful tool that allows you to track tasks in groups. It's organized very much like a "Kanban" system and is used by agile software developers and others who need a system of tracking tasks through various steps. Trello lets you forward email to create cards, assign cards to people to work on, and have conversations on each card via email, a mobile app and a desktop app.

I have two "boards" on Trello. One is a "Meetings" board, where each meeting request starts life in the "Incoming" list with a color coded tag for which city the request is for or whether it is a teleconference. I then drag meetings requests from "Incoming" to "Someday Soon" or "Schedule" or "Turn Down."

The cards in "Schedule" are sorted roughly in order of priority, and my team takes cards from the top of the list and starts working on scheduling them in that order. Meetings where we have suggested dates and are awaiting confirmation go to the "Waiting For Confirmation" list, and cards that are confirmed end up in "Confirmed" list. If for some reason a meeting fails to happen, then its card gets moved to "Failed/Reschedule", and when meetings are completed, they end up in "Completed." At least once a week, I go through and archive the cards in the "Completed" list after scanning for any missing follow-up items or things that I need to remember. I also go through "Incoming" and "Someday Soon" lists and make more decisions on whether to schedule or turn down meeting requests. And I try to check the priority ranking of the "Schedule" list.

In addition to the "Meetings" board, I have a "To Do" board.

The To Do boards has a similar "Incoming" list of things that others or I think might be something worth doing. When I've committed to doing something, I move it to the "Committed" list. When something isn't done and instead gets stuck because I need a response from someone, it moves to a "Waiting" list. Once completed, it goes to "Completed" and is later archived after I've given myself sufficient positive feedback for having completed it. I also have "Abandoned" and "Turn Down" and "Delegated" lists on this board.

Keeping is a tracker system very similar to what a customer support desk might use. It allows you to convert any email into a "ticket" and you can create an email address that is also the email address for the ticket system. More people have access to my ticket system than my inbox. Once an email becomes a ticket, everyone on the team can see the ticket as a thread, and we can put private notes on the thread for context. Keeping manages the email exchange with the "customer" so that anyone can take care of responding to the inquiry, but the people who are assigned to the email have it show up as "open" in their personal list. When a thread is taken care of, the ticket is "closed" and the thread is archived. Threads that are still not finished stay "open" until someone closes it. If someone replies to a "closed" thread, it is reopened.

Keeping is a Chrome and Gmail plug in and is a bit limited. We recently started using it, and I think I like it, though some of us use a desktop mail client which limits features you can access such as assignment or closing tickets. Keeping also has a bit of a delay to process requests which is annoying when we're triaging quickly. Keeping also can be redundant with Trello, so I'm not positive it's worth it. But for now, we're using it and giving it a chance to settle into our process.

You can book me

I've found that 15-minute office hours are an effective (but tiring) way of having short, intense but often important meetings. I use a service called youcanbook.me. It lets me take a block of time in my calendar and allow people to sign up for 15-minute slots of it via the website, using a form that I design. It automatically puts the meeting in my Google calendar and sends me an email and tracks cancellations and other updates.

I have a number of people who are good at editing documents ranging from email to essays and letters. I use Google docs and have people who are much better than me copy edit my writing when it is important.

Love the idea of a Trello board to triage incoming meeting requests. Seems like the columns could be slightly streamlined - the joys of knowledge work. :)

Excellent comparison. I use Trello to manage my manuscript tasks and team organizer but find Evernote to be a bit more versatile. I'll have to try email management since I have a series of boxes for various professional platforms

Thank you for sharing this Joi, a lot of gems here for sure.