Recently in the SARS Category

SMS and SARS article by Xeni in Wired »

Good article by Xeni (a boing boing blogger) in Wired about the role of SMS in disseminating information about SARS and the attitude among Asians about SARS.

As SARS gallows humor is forwarded from cell phone to cell phone throughout the region, are "cough" ring tones next?

You can catch SARS on the plane »

New York Times
Globetrotting Traveler Infected With SARS [...] Airlines have been saying that the filters aboard modern planes do a good job of removing viruses from the air. But according to the health department here, at least 13 people have fallen sick with SARS after they shared a flight from Hong Kong to Beijing last month with an elderly man who had become infected with the disease while visiting his brother in a hospital here.

SARS could be biological weapon: experts »

Russian infectious disease experts say Severe Acute Respiratory Syndrome (SARS) may be a man-made biological weapon.
[...]
The virus, according to Academy of Medicine member Sergei Kolesnikov, is a cocktail of mumps and measles, whose mix could never appear in nature. "We can only get that in a laboratory," he told a conference in the Siberian city of Irkutsk, quoted by RIA Novosti news agency. It may have spread because of an "accidental leak" from a lab, he said.

Here is a site with a graph of the SARS epidemic. Incidentally, it is powered by Squeak.

Via Dave Smith but blogged first by Frank.

Does SARS come from animals? Deja vu? - via ProMED »

A few quotes from the proMED-mail, which is a good list to follow for on-the-ground updates from the global medical community.


The causative agent has not yet been identified. It appears to be a Paramyxovirus, a Coronavirus, or a mixture. The World Health Organization (WHO) has hypothesised that the causative virus(es) may be of animal origin, from domestic or wild animals located in Guangdong Province (in South China).

This is why the World Organisation for Animal Health (OIE) has contacted the Chinese Veterinary Authorities to obtain information on the animal health situation in China over the past 6 months and, in particular, in Guangdong Province.

As SARS enters its fifth month, a number of questions remain unanswered. Why Asia? Why now? Why young adults? To these I would add a fourth question (Why the panic?) and an hypothesis.

Every 10 years or so, a pandemic spreads out from China and surrounding countries. The 'Asian flu' of 1957 claimed 98 000 lives worldwide, and the 'Hong Kong flu' of 1968 an additional 45 000 lives. Although the world community was rightly concerned, I do not recall a collapse of air travel, imposition of quarantine, or daily front-page headlines. To date, SARS has claimed 79 lives, and the etiological agent appears to be far less contagious than Influenza A virus.

Picture in SCMP of guys wearing masks in HK bar » 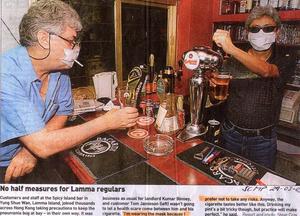 I just had lunch with a friend from Hong Kong. He said people are pretty freaked out. All of the schools are closed and hotels are at 10% capacity. He says that you can actually trace the infections back to a doctor from China who visited Hong Kong for a wedding. He sneezed in an elevator and all of the people who were in the elevator are now dead. There was a rumor that the people who got the disease from him all died, but the people who got the disease from those people haven't all died and that the virus diminishes in deadliness as it is transmitted, but it appears to be a rumor. People in HK are stocking up, partially because of the teenager hoax which involved a forgery of a newspaper site blowing the problem out of proportion and sending everyone into a panic. Seven people are reported to have symptoms in Japan and are being tested, but they they have not been confirmed to have SARS.

Everyone in HK is wearing masks, although it probably doesn't help. Immigration officers in Tokyo are wearing masks, but only telling people who have fevers, have visited risk countries and are coughing to go to the quarantine office. People in China still seem to be under-informed and are not wearing masks.

BEIJING, April 3 — In early March, when a new mystery illness started hopscotching around the globe, Chinese health officials looked on in silence, as if to say, "This has nothing to do with us."

At that point, China was already four months into an outbreak that officials later acknowledged was the same disease, severe acute respiratory syndrome, or SARS. Yet they insisted that the situation was fully under control, shared none of their data and declined to join international investigations.

It wasn't newspapers or television or radio that originally spread the word about the outbreak of a serious respiratory illness, now known as SARS, in southeast China. It was SMS -- text messages on mobile phones.

The Chinese government sent out six million SMS messages to Hong Kong cellphones yesterday, informing the populace that the web-page that reported that the whole city would be quarantined to contain the SARS outbreak was a hoax perpetrated by a 14-year-old who'd been arressted.

April 4, 2003 Paul Krugman on the economic impact of SARS


Earlier, I praised the WHO on their handling of SARS, but as the news starts to unfold, I guess it's not that simple. The tendency for the web to amplify fluctuation is probably hurting our ability to get a good sense of the actual risk of the situation. I think we should be focusing on what we should do to minimize risk rather than freaking out about it. On the other hand, it still appears we know so little about it. The question is whether the damage from freaking out exceeds the risk that SARS poses...

By Hamish McDonald, Herald Correspondent in Beijing, and agencies
April 3 2003

China's wall of silence on the lethal pneumonia epidemic started to break open yesterday when health officials in southern Guangdong province reported 361 new cases of the illness and nine more deaths during March.

This appears to contradict earlier claims that the outbreak was "under control". At the same time, a team of four experts sent by the World Health Organisation was given permission to visit Guangdong, the suspected origin of the new disease, after waiting five days in Beijing for a response.

The figures bring the number of severe acute respiratory syndrome cases in China to 967 at the end of the March, with 43 reported deaths, though more cases might be added later from other Chinese provinces.

A friend of mine who just got back from Shanghai told me that he didn't see a single report about SARS when he was in China. It's stuff like this that still makes me doubt China's ability to really "play" yet. 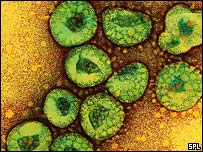 I reported earlier that the situation with the killer pneumonia was getting better, but it looks like it's getting worse. AP reports that over 1000 people in Hong Kong have been quarantined and travel alerts are increasing. The WHO has called on countries to screen international air travelers for symptoms.

UPDATE: BBC reports that they've probably identifed the virus and it's called the Corona virus. via Marc's Voice

SARS virus identified - no easy cure, but not so infectious »

You have probably seen this already, but just to close the loop on my March 16 post about this...

I commend the WHO et al. Everyone did a great job coordinating by email, keeping everyone informed without causing a panic. Great execution. I felt more informed than any other such threat in the past. On the other hand, if the bug had gone into a full blown outbreak, there might have been a panic...

BBC
Scientists in Hong Kong have claimed a key breakthrough against a virulent form of pneumonia which is claiming more victims around the world.

The researchers have identified the mystery respiratory illness at the heart of a global health scare as a virus from the paramyxoviridae family, which are responsible for conditions such as mumps and measles.
[...]
"It is rather slow-moving, rather restricted to families and hospitals, not a rip-roaring affair, but still very nasty.

"There are no anti-viral drugs against this family of viruses, and there are no vaccines available. It will be a question of several years work.

"But it is not fantastically infectious, so I wouldn't expect there to be a massive outbreak in other parts of the world."

Yesterday, the NYT reported the outbreak of a killer pneumonia in Asia. I was freaking out getting ready to blog about it when the WHO just announced that it has gone global.

First the New York Times says it's an Asian thing.

Hundreds of people in Vietnam, Hong Kong and China have been stricken by a mysterious respiratory illness that has killed at least six people and left all the others with severe breathing difficulties from which they have yet to fully recover, worried officials of the World Health Organization said today.The scary quote from the NYT article was:

New York Times
"This pathogen is turning out to be a tough thing to pin down," he said. "Nothing is turning up, not a thing."

Then the next day, it has gone global...

WHO
Date: 15 Mar 2003
World Health Organization issues emergency travel advisory
Severe Acute Respiratory Syndrome (SARS) Spreads Worldwide
----------------------
15 March 2003 | GENEVA -- During the past week, WHO has received reports of more than 150 new suspected cases of Severe Acute Respiratory Syndrome (SARS), an atypical pneumonia for which cause has not yet been determined. Reports to date have been received from Canada, China, Hong Kong Special Administrative Region of China, Indonesia, Philippines, Singapore, Thailand, and Viet Nam. Early today, an ill passenger and companions who travelled from New York, United States, and who landed in Frankfurt, Germany were removed from their flight and taken to hospital isolation.

Due to the spread of SARS to several countries in a short period of time, the World Health Organization today has issued emergency guidance for travellers and airlines.So, what does "emergency guidance" mean? For 155 people on the Singpore Airlines flight it means being quarantined...

Reuters
Some 155 other passengers who had been due to change planes or stay in Frankfurt were placed in quarantine there, while the remaining 85 passengers and 20 crew on the Singapore Airlines flight continued their journey, German officials said.

via IP and Louis. Thanks!